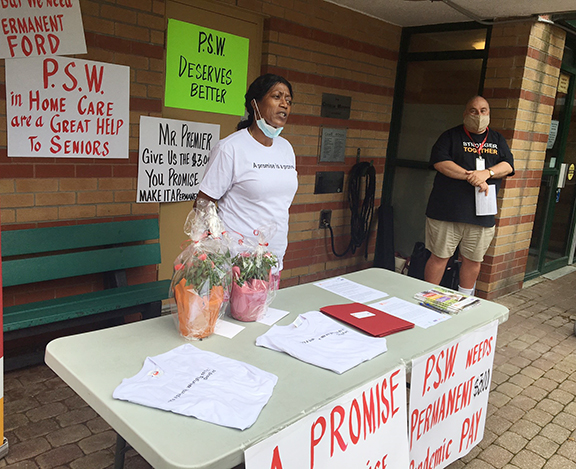 Myrna Harriot speaks at a rally for PSWs in Homecare at the Cecilia Murphy Supportive Housing for Seniors building in East Toronto recently. Photo by Alan Shackleton.

Personal Support Workers (PSWs) in Homecare across the province are letting Premier Doug Ford know that they want him to keep his promise when it comes to their pay.

A number of PSWs and their supporters gathered at the Cecilia Murphy Supportive Housing for Seniors facility near Coxwell and Danforth avenues last week to send the message.

“There are few things more important than looking after our seniors and helping them stay at home,” said Bill Sinclair, President and CEO of The Neighbourhood Group which is the operator of Cecilia Murphy housing.

When COVID-19 was tearing through long-term care homes across Ontario, the need for qualified homecare that could keep seniors safe and living in their own residences became very clear.

To recognize the importance of PSWs in Homecare during the pandemic, the provincial government introduced a $3-an-hour pay wage for them almost a year ago. That pay wage boost is set to expire at the end of this week, and PSWs want it made permanent as they say was promised by Premier Ford in early July of this year.

And even with the raise made permanent, the salaries being paid PSWs is low.

“Three dollars is an insult,” said long-time PSW in Homecare Myrna Harriot. “I’m not here for the money, but making money makes a big difference. We deserve so much more than three more dollars to provide these services and keep our residents so healthy and happy.”

Harriot has been providing care at Cecilia Murphy Supportive Housing for Seniors for the past 11 years, and she said there was not a single case of COVID-19 recorded by The Neighbourhood Group’s facilities. That was certainly not the case in long-term care facilities where the pandemic resulted in huge case numbers and deaths of residents.

“Because of the work of people like Myrna our seniors were safe and did not get COVID. They were able to stay at home and out of the hospital,” said Sinclair.

“We are the doctors, physiotherapists, psychiatrists, and like family for our residents,” said Harriot.

Sinclair said without the $3 pay raise made permanent by the province, it will be become difficult to keep staff for non-profit residences that help seniors live safely in the community.

Beaches-East York MPP Rima Berns-McGown also attended the rally that took place on Aug. 12 in support of the demands by the PSWs in Homecare.

She spoke of a recent personal experience involving a close friend that showed just how dedicated PSWs in Homecare are towards they people they look after.

“It simply would not have been possible for him to be at home without Miguel (the PSW who helped him,” said Berns-McGown of her friend.

She said Premier Ford’s apparent willingness to see the pay raise come to an end this month is “actively cruel”.

“We need to put our money where our politicians’ mouths are,” she said of making the raise permanent.