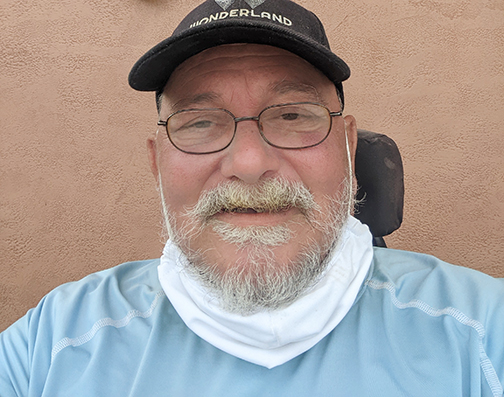 Wayne Gilmar is known as The Swan Whisperer of Ashbridges Bay. Inset photos show the swans that call the bay home, and a visiting cardinal.

In the time of COVID-19 we are all looking for people or events that inspire; beacons of hope amidst a storm of uncertainty. People who can galvanize our optimism in a time of great despair

Sometimes these people show up in places where you least expect them.

It was my sister-in-law who first spoke to me about The Swan Whisperer.

I was immediately Intrigued by her stories about this person and wanted to meet him. Nancy assured me that meeting him would not be a problem. He could be found most days sitting by Ashbridges Bay.

It was a beautiful sunny morning and the loop, or peanut which is what we Toronto Beach locals call this area, looks dazzling in the late morning sunlight.

We are on our way to chat with The Swan Whisperer.

Wayne Gilmar appears before us, sitting comfortably in his electric wheelchair by the water’s edge.

His face lights up as we approach. He greets us enthusiastically with a warm smile, calling to Nancy by name.

I notice immediately the glow of his countenance. He seemed lit from within by some incandescent light.

I can’t wait to learn more about Wayne.

He told me his name and that he grew up on a 20-acre farm in Sault Ste. Marie. The second youngest in a family of eight. Their family consisted of six boys and two girls.

Wayne laughingly called himself a Heinz 57.  I had never heard this expression before so needed an explanation.

He joked that he is a mix of Italian, Scottish, English, and Irish. He then added that he identifies as Indigenous. Wayne explained that he has no Indigenous blood, but that he has adopted the Ojibwe as his own because as a youth he had many Ojibwe friends who embraced him as family.  Wayne said he admired the devotion to the land and the reverence to nature shown by his friends.

He said he could not be racist if he tried, because he has a bit of every nationality in him.

I love his sense of humour and joie de vivre. Wayne brims with natural charm.

Life has not always been easy for Wayne, but he prefers to think of himself as very lucky.

Wayne’s mom died when he was six years old in a tragic car accident.

He believes that it was living on the farm that cultivated his love for animals and nature. This is where he found solace when life got tough.

Looking around at the loop in a state of awe, Wayne told us that this little spot of real estate where he gets to hang out is as close to heaven as he feels he can get.

It’s obvious it has been this special place that has kept him centred and whole during the craziness of the pandemic.

He wanted us to understand that throughout the pandemic he has never felt any anxiety or depression thanks to this very spot the three of us are now sharing.

Wayne has a special attachment to the wildlife around Ashbridges Bay and in particular the swans that reside here. He shared that he considers himself to be part of the swan family.

He captured my full attention with that statement.

I ask him if he has names for his special friends. Wayne answered quickly that indeed he does. I ask him what their names are? He said the female is mommy and the male is daddy. We giggle at the appropriateness.

Wayne said his relationship with them has become so strong that he gets emotionally upset whenever they encounter a difficult situation.

This past year turned out to be one of those difficult years for these majestic creatures.

Wayne recounted how upset he was when he discovered that a decision had been made to oil the eggs of the swans as they were considered to be invasive. Once the eggs were oiled the mother swan was forced to abandon her nest, Wayne said.

He recalled with great compassion how heartbreaking it was to witness how depressed and despondent the mother swan became after this event.

Wayne told us how she kept to herself, refusing to eat for several days. She was unable to go back home to her nest. This was very distressing and he spoke sadly of how the female swan was there physically but seemed to be only a shell of her former self.

Wayne told us how the male swan, would come over and lie by his feet looking for comfort and reassurance during this difficult time.

We shared Wayne’s sadness as he retold this horrific event.

This past Canada Day we were reminded that in 1967, to commemorate Canada’s Centennial year, Queen Elizabeth gifted Ottawa with six swans. The Royal Mute swans and the Black swans.

Wayne provided us some remarkably interesting facts about swans.

He told us they can live for up to 30 years.  He added that they mate for life and will only find a new mate if they are widowed.

He also said that swans can die of a broken heart if their partner dies. They love deeply.

Swans are also very territorial. Wayne pointed out the male swans’ territory, which is the edge of the Ashbridges Bay Yacht club. The cob fiercely guards this boundary challenging any new birds that try to infiltrate.

I find it all very fascinating. I am struck by the realization of how little I know about these magnificent birds.

Wayne then recalled another story that happened in 2020 when the mother swan got a fishhook caught in the joint of the bone in her toe. Wayne was worried about an infection which was there and called the Toronto Wildlife Centre who came immediately. They had to take her away to remove the hook.

Wayne said he could not to bare to watch the cob who was in such distress watching the pen in such anguish. Wayne did his best to comfort the male swan, in the absence of his mate. He kept trying to reassure the cob that his love would return.

He then told us how he cried when the pen was returned to the bay. He found that moment so profoundly beautiful.

Wayne said the male swan, when he saw his mate, let out a loud honk and took off to greet her. He said as the swan got closer to the pen, his vocalization got more and more beautiful. The cob, then circled her gracefully while bowing to her until their necks intertwined in a perfect heart.

Wayne said the cob was in an extreme emotional state of joy. He added the best part was when the pen noticed her cygnets. She let out a loud exuberant honk, taking off like a rocket to join her young family.

This is when Wayne told us that a swan can die of a broken heart. He said he still gets choked up recalling what a beautiful moment it was when they were all reunited.

Wayne said fishing enthusiasts need reminding their waste of lure and line can pose serious harm to countless wildlife, and that these items need to be disposed of properly.

Wayne has many stories. He said he even helped the male swan teach his young family to fly. Wayne said the cob was not having much luck until he got involved in the flight school. He explained how he went back and forth in his wheelchair flapping his arms. After a few days of coaching, the dad let out a loud squawk and the family all took to the skies.

Wayne said the dad knew what he was trying to do and acknowledged his effort in his own special way.

I can see there are many magical moments for Wayne. His connection to this family of swans is very touching.

Wayne talks easily and is very comedic in the telling of his tales. He laughingly said how he has little money but feels so rich in blessings.

We sit chatting happily about his adopted swan family when a beautiful cardinal appears. The bird is perched in the beech tree behind us, chirping loudly.

Wayne knew from experience what the bird wanted, and he reached in his bag for more food. The next thing we knew, the cardinal was feeding directly from Wayne’s hand.

At the same time, a cluster of red wing black birds started to gather around his chair. They were all looking for free handouts. It becames very apparent that Wayne is a trusted and familiar friend.

Wayne laughingly called himself the local food truck for birds. He commented that the minute his wheelchair rolls up his feathered friends start to gather. Proof positive is seen in the noisy gathering of birds that surround him. He shared with us that out of all his winged friends, he feels closest to the male swan. The two of them have an incredibly special connection to each other.

He mentioned that when he is in his wheelchair that he and the male swan are the same height. He also mentioned how the cob loves to lie next to Wayne’s feet. This simple act fortifies their bond.

I found Wayne’s stories very remarkable and wished I had more time to spend listening to him.

Nature never disappoints. Since time immemorial nature has been a trusted source of healing. They say that it is next to impossible to feel depressed when you are immersed in nature.

While the COVID-19 pandemic continues on, Wayne and his swans share an especially important message with us. They teach us about the power of love, as well as the beauty and healing qualities of Mother Nature. They remind us that sometimes it is the simplest of pleasures that provide us with the greatest reward.

Wayne is a reminder of how important it is for all to go outside and take a much closer look at all the natural beauty in our surroundings.

Soak in the colour of the sky and the warmth of the sun. Listen for the sounds of the wind rustling through the trees. Search, the trees for our fine feathered friends. Learn their distinctive voices. Intoxicate yourself on the magnificence of our planet.

If you are in need of some inspiration, take a walk along the Boardwalk and look for Wayne.

He will teach you to count your blessings instead of your sorrows. He will help you find humour and lightness in the world around you. If you are incredibly lucky, he can show you how a positive attitude and outlook are such precious gifts.

In closing, I would like to say that my sister-in-law was so angry about the incident involving the oiling of the eggs that she is looking into how and why it happened. It will not make a difference for this year, but hopefully this is the last time the mother swan will have to abandon her nest.

Many thanks to Wayne Gilmar, The Swan Whisperer of Ashbridges Bay.

Wayne Gilmar is the Inventor of Happy Squirt, an oral micro-dosing delivery system for medical marijuana. For more information and to follow Wayne on Twitter, go to @SquirtHappy.