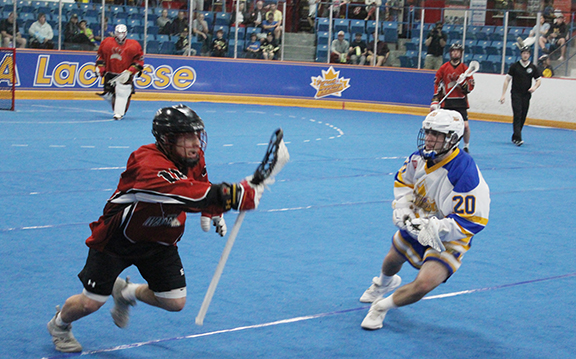 A Toronto Beaches Junior A Lacrosse player (white sweater) is seen in action against the Whitby Warriors in this Beach Metro News file photo from 2019 at Ted Reeve Arena.

Due to COVID-19, the 11-team league’s regular season game schedule has been condensed from three games a week to a pair of games a day over two consecutive weekends. All OJLL games are being played at the Toronto Rock Athletic Centre.

The season opened on the weekend of July 24 and 25.

In their first game on the Saturday, Toronto Beaches fell 11-3 to cross-town rivals the Mimico Mountaineers. The Beaches bounced back in their second game, however, topping the Peterborough Lakers 8-7.

In action of the Sunday, the Beaches began their day with a convincing 10-2 win over the Orangeville Northmen. The Beaches rounded out the first weekend of play with a 6-3 loss to the Whitby Warriors.

Coming up this weekend, the Beaches will play two games again on both Saturday, July 31 and Sunday, Aug. 1, in Oakville.

The schedule for this coming weekend sees the Beaches play the same four East Division teams that they met last weekend.

Playoff teams will be determined for the weekend of Aug. 7 following the end of the regular season.

For the full OJLL schedule for this season, please see https://www.ontariojuniorlacrosse.com/news_article/show/1173386

Locally, fans who want to watch the action live-streamed in a social setting can do so at Busters By The Bluffs, at 1539 Kingston Rd.

For more info on Toronto Beaches Junior A Lacrosse and the OJLL, please see our earlier story at https://beachmetro.com/2021/07/23/toronto-beaches-junior-a-lacrosse-kicks-off-condensed-season-on-july-24-with-weekend-games-in-oakville/