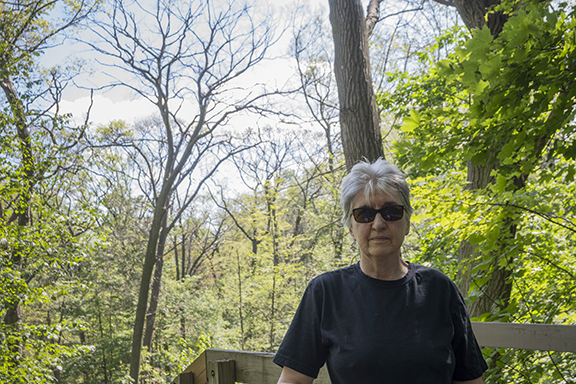 Beach resident Valerie Edwards in Glen Stewart Ravine with some oak trees that have been impacted by this summer's outbreak of LDD Moths. Photo by Alexandros Varoutas.

Editor’s Note: Many organizations are transitioning away from the outdated term “Gypsy Moths” and instead referring to the species as LDD (Lymantria dispar dispar) Moths, and for the purposes of this article, we will follow suit.

The City of Toronto is seeing an influx of LDD Moths (formerly known as European Gypsy Moths), which has left some residents in the Beach concerned for the foliage in the area.

Resident Valerie Edwards has had her eye on the ongoing destruction wrought by the little caterpillars and is worried that, without the proper steps taken by the city, there could be irreversible damage to the area’s oak tree population.

This year’s moth problem is considerably worse than most years, and Edwards worries that not enough people are acknowledging the severity of the problem.

“The thing that has got me bothered about this is that nobody is talking about it,” Edwards told Beach Metro News recently.

“It just stuns me that I don’t see anything in the papers about it or hear the city saying anything about it.”

The LDD Moth is a non-native species that can wreak havoc on foliage as populations spike every few years.

There are four phases to the moth’s life cycle: egg, caterpillar, cocoon and moth.

The egg phase is when we see clumps of eggs, hundreds or even thousands at a time, stuck to surfaces around the city. Usually, these are on tree trunks but they’re also commonly found around the outside of a house, on patio furniture, etc…

The cycle begins around late fall with the eggs dormant until the spring. During this time, the eggs can be manually removed if spotted either by members of the community or city workers.

Once spring rolls around and the weather gets warmer, the eggs hatch and the caterpillars begin their journey up the tree trunks to the canopy to feast. Alternatively, should they want to relocate, they can hang from a thread and get blown to another tree nearby.

As they eat and grow, they begin to moult until they develop the distinctive red and blue dots. On average, one caterpillar can consume roughly one square metre of foliage.

Once they’ve grown to their full size of about six centimetres, they find somewhere safe to cocoon for about two weeks before they’re ready to reveal themselves again.

Once fully transformed, the moths enter their last stage in life. Unlike many other similar species, LDD moths are only interested in reproducing in this phase and thus don’t bother to eat anything for the remainder of their life.

Female moths can be identified by their larger size and white wing, compared to the male’s brown wings.

The main three controls on the species are a fungus, a virus, and a specific breed of wasp that feeds on the eggs. The fungus and virus are the most effective of these but rely on damp, cool conditions to thrive.

Karen McDonald is the Senior Manager of Ecosystem Management with Toronto and Region Conservation Authority. She said that this summer is considered by the Invasive Species Centre to be the worst outbreak of the moths in the history of Ontario.

But it’s not all bad news, she said.

“We have been noticing pretty widespread mortality of the caterpillars due to the NPV virus as well as the fungus,” said McDonald.

“When caterpillars become infected with NPV, they hang in a really characteristic, upside down V shape and we’re seeing that, really, everywhere right now. And given the recent moist weather we’re also seeing the fungus do quite a number on the caterpillars.”

For those wondering if birds or other predators can help, McDonald pointed out that they can only do so much, and only up to a certain point in the caterpillars life cycle.

“When infestations are as high as they have been this year, bird predation is probably inconsequential, there’s just more caterpillars than they can eat,” she said.

“The other complicating factor is that they have these hairs on them that make it really challenging for birds to eat the caterpillars, especially when the caterpillars get older and bigger.”

Beaches-East York Councillor Brad Bradford is aware of the problem. In a statement from his office he said he’s working closely with city forestry staff to stay on top of hot spots in the community.

“The city has done aerial spraying in some areas, and stepped up as much as possible early in the spring season to tackle the issue,” the statement said. “They are also monitoring defoliation levels closely right now. This will help give us a read of how many eggs are being laid this season and what we need to do to get further ahead of the curve next season.”

But, Bradford noted, city staff can only do so much. Community members also have a role to play in controlling the outbreak of LDD Moths.

On a local level, residents can take steps to help prevent the spread on their own property. Earlier in the season, caterpillars can be hand picked from small trees or shaken out to help protect young trees with less foliage. If residents notice egg masses, usually an amber colour, on trees, they can scrape them off.

McDonald pointed out, though, that it’s not enough to remove them. They have to be disposed of properly, in the garbage.

“If you just scrape them off onto the ground, they’ll still manage to survive,” she said.

Once the caterpillars grow to about an inch in length, they might start moving back down the tree to find somewhere to cocoon. This is where burlap banding comes into play.

Banding involves wrapping the tree trunk with a wide piece of burlap and then tying a string around the middle. The burlap is then draped over the string creating a lip where the caterpillars will take shelter.

The caterpillars can then be collected every day from this lip and disposed of. The city has more detailed instructions on how to do this here.

However, Edwards said the business as usual approach is not good enough.

“We could pay a really big price for complacency,” she said.

The most common trees in the Beach are oak trees, and oak trees happen to be the most susceptible to these moths.

Most trees can recover from having their leaves eaten but oak trees can be killed in just one season from the moths. And the ones that don’t die are left barren and vulnerable to disease.

As Edwards drives by stretches of defoliated trees along the highway, she can’t help but consider what the city would look like with a huge percentage of trees missing.

More information on the moths can be found at the following websites: