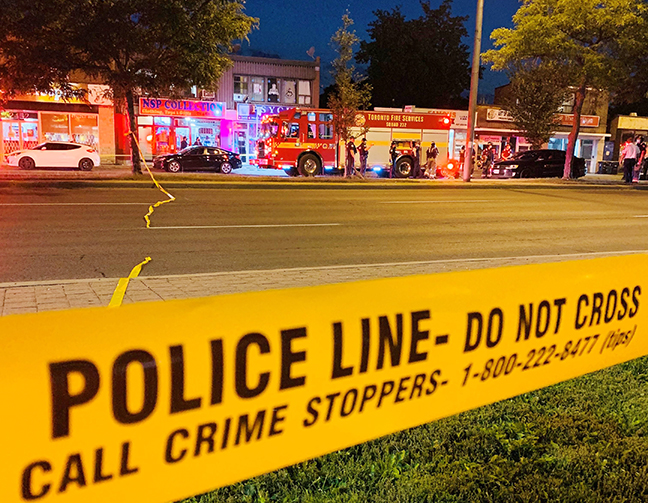 A 71-year-old man was pronounced dead at the scene after he was struck by the driver of a vehicle while crossing Kingston Road west of Midland Avenue on the night of Friday, July 23. Photo by Mary Beth Denomy.

A 71-year-old man died after being struck by a vehicle on the night of Friday, July 23, in Cliffside.

Police were called to Kingston Road, between Midland and Sandown avenues, shortly after 9 p.m. for reports that a pedestrian had been struck by the driver of a vehicle.

When emergency crews arrived, they found the pedestrian with serious injuries. He was pronounced dead at the scene.

The 24-year-old male driver of the westbound vehicle involved, a 2013 Volkswagen Jetta, remained at the scene.

Toronto police are appealing to local residents, businesses and drivers in the area at the time who may have security camera footage or dashcam video to come forward.

Anyone with information on the incident can contact Toronto police traffic services at 416-808-1900. Police can also be contacted anonymously through Crime Stoppers at at 416-222-8477 or online at https:www.222tips.com