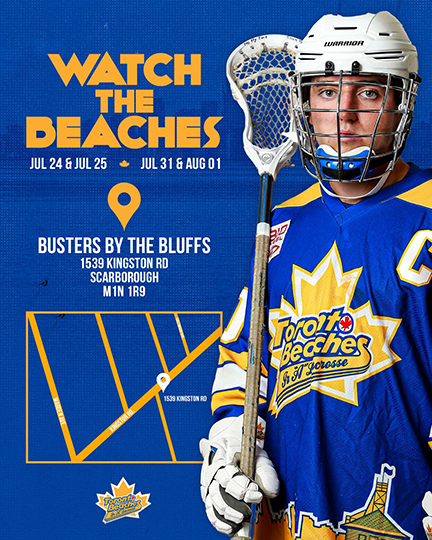 The Ontario Junior Lacrosse League (OJLL) season begins on Saturday, July 24, at the Toronto Rock Athletic Centre in Oakville and the Toronto Beaches Junior A team will be taking part in the action. Fans can catch the action being live-streamed locally at Busters By The Bluffs on Kingston Road this weekend and next.

The Ontario Junior Lacrosse League (OJLL) season begins on Saturday, July 24, at the Toronto Rock Athletic Centre in Oakville and the Toronto Beaches Junior A team will be taking part in the action.

Due to COVID-19, the 11-team league’s schedule will see 44 regular season games played over the next two weekends. Playoffs and the championship game for the Iroquois Trophy will take place on the weekend of Aug. 7.

Usually, Toronto Beaches Junior A Lacrosse would play their home games at Ted Reeve Arena, but the league has instead condensed and centralized its season because of the pandemic.

Toronto Beaches will take to the floor at 11 a.m. on July 24 to start their season with a game against cross-Toronto rivals the Mimico Mountaineers.

“This year we’ll be competing, hopefully, for a Minto Cup,” Reid Acton said, president of Toronto Beaches Junior A Lacrosse.

The Minto Cup is the Canadian championship trophy for the top Junior A lacrosse team in the country.

Toronto Beaches and the Mountaineers are the only two OJLL lacrosse teams in Toronto with Mimico in the west end and the Beaches in the east.

“They grew up competing against each other so it’s a pretty exciting first game,” Acton said.

Other teams in the OJLL who will taking part in this year’s season and the chase for the Iroquois Trophy are the Orangeville Northmen, Peterborough Lakers, and Whitby Warriors in the East Division; and the Brampton Excelsiors, Burlington Chiefs, Kitchener-Waterloo, Oakville Buzz, Six Nations Arrows Express, and St. Catharines Athletics in the West Division.

The rest of this weekend’s schedule for Toronto Beaches will see the local team facing Peterborough  at 5 p.m. on Saturday, and then playing on Sunday against Orangeville at 11 a.m. and Whitby at 5 p.m.

On the following weekend, Toronto Beaches will play the Mountaineers at 11 a.m. followed by a 3 p.m. match with Orangeville on Saturday, July 31. On Sunday, Aug. 1, Toronto Beaches play Whitby at 1 p.m. and Peterborough at 7 p.m.

Playoff teams will be determined for the weekend of Aug. 7 following the end of the regular season on Aug. 1.

In a normal season, teams would play three games a week, said Toronto Beaches general manager Clem D’Orazio. He said the team has been working hard to prepare for this upcoming series of games.

“I think we’re all pretty happy with how the boys are performing in terms of on the floor and even connecting off the floor,” said D’Orazio.

Many of the players in the OJLL, including members of Toronto Beaches, play college lacrosse in the United States which is one of the reasons the season needs to end in early August. COVID-19 also presented some challenges in getting players back across the border.

However, that’s history now and everyone is looking forward to resuming competition since last summer’s season was cancelled due to the pandemic.

“I think we’re just excited for the opportunity to play lacrosse. Iit’s been almost two years and we just want to get games going and represent our team,” said D’Orazio.

The OJLL’s defending Iroquois Trophy champion from 2019 is Orangeville, who also went on to win the Canadian championship Minto Cup that year.

Founded in 1933, the OJLL is generally considered the world’s most competitive Junior A lacrosse league.

Fans will be able to attend the upcoming games in Oakville through invitations only. Everyone involved, from the team players to management, is given two invites each.

The games will be streamed virtually through the Ontario Junior Lacrosse League website.

Locally, fans who want to watch the action live-streamed in a social setting can do so at Busters By The Bluffs, at 1539 Kingston Rd.

The full schedule of the tournament can be found at the Ontario Junior Lacrosse League site: