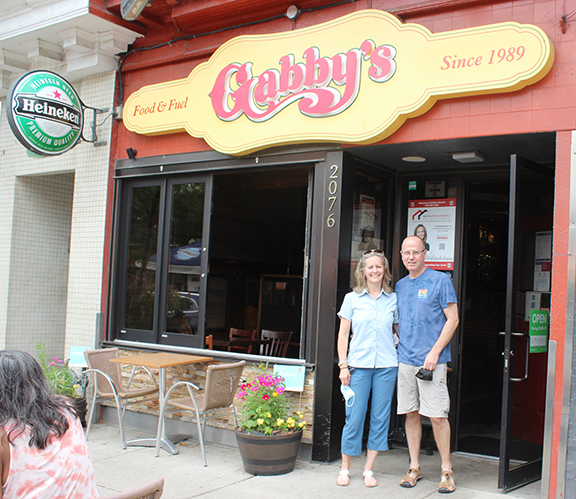 Local restaurants were thrilled to welcome back customers to indoor dining on Friday, July 14.
The move to the Province of Ontario’s Stage 3 in its COVID-19 pandemic reopening plan earlier that day was welcome news at restaurants along Queen Street East in the Beach.

Nicole Boudreau and Tim Faber, the owners of Gabby’s just west of Wineva Avenue, said they had only been open for a couple of hours when Beach Metro News dropped by on Friday afternoon to see how things were going, but they were very “excited” to be welcoming customers back into the pub and restaurant once again.

“It’s time,” said Tim.They also wanted to thank the Beach community for being so supportive during the roller-coaster ride that has been COVID-19 for the past year and a half.

“The community has been so supportive to us,” said Nicole. “Without that support, we would not have survived. The Beach Village BIA has also been stupendous with helping us deal with all the problems and getting our patio set up.”

She said the changing rules as the pandemic went through waves of infection took a toll on many businesses, and one of the hardest hit sectors was restaurants and pubs.

“We were open then shut again so many times, and there’s so much cost involved when that happens. It was such a big disappointment in March,” she said.

Back at the end of March, restaurants and pubs were allowed to reopen outdoor patios but that only lasted two weeks as the third wave of COVID-19 surged across the province and another lockdown was mandated.

Nicole and Tim have owned Gabby’s on Queen Street East for the past 20 years, and are among the longest continuous owners of a restaurant in the Beach Village area.

“Pretty much everywhere else has turned over ownership but us,” said Tim.

Nicole added that trying to keep a restaurant/pub operating during a global pandemic has been “a surreal experience and not in a good way.” A little further east on the south side of Queen Street East, Slate manager Elena Grinchenko said the restaurant was thrilled to be able to have the extra space provided by allowing indoor dining once again.

The restaurant has a small balcony for a couple of outdoor tables and is also taking advantage of the City of Toronto’s CafeTO program which allows a patio in the curb lane of Queen Street East.

“Everyone is so excited about being able to come back inside,” said Grinchenko on Friday afternoon.

“Outside really only works well in the nice weather,” she said.

Having more space means being able to welcome more customers at Slate.

“It’s about being able to make people happy while also making sure they are safe,” said Grinchenko.

She also thanked members of the community for their tremendous support during the darkest days of the pandemic.

“We had lots of local regular customers who would come once a week for pick up. Now we’re so happy to be able to serve them again instead of just passing along the food order. We’re happy we can serve them now beyond the door.”