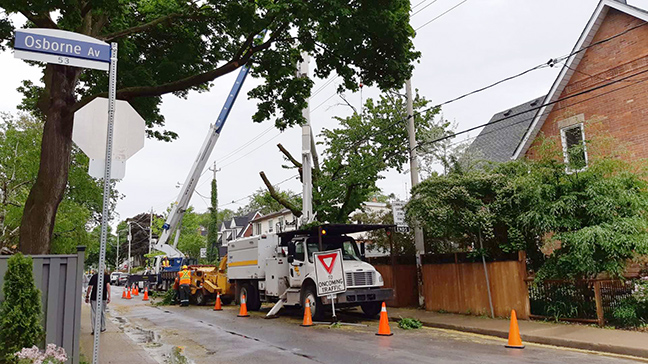 A large cherry tree on the corner of Osborne and Swanwick avenues was taken down late last month due to safety concerns. Photo by Melinda Drake. Inset photo by Alan Shackleton shows Bill Trought on the stump of the tree.

Bill Trought didn’t want to see the cherry tree that had been a landmark in his Upper Beaches neighbourhood cut down recently.

However, the City of Toronto had inspected the tree and said it was starting to rot, was not safe and would have to be removed.

Trought, who has lived in his home at the corner of Swanwick and Osborne avenues for the past three years, said the tree was one of the reasons he bought the house.

“When I came to look at the house three years ago, the tree was the first thing I saw and I fell in love with that cherry tree,” he said.

Trought was not sure exactly how high or how old the tree was, but he said it was a sad day when the city ordered it cut down.

A tree-cutting crew and a truck with a crane were needed to take the tree down, he said.

Many area residents came out to watch and take photos of the tree being cut down and removed in late May. Since the tree was actually on city property, Trought did not have to pay for its removal even though it was located on his fence line.

He said a large branch fell off the tree about 18 months ago, and after that city inspectors came out to take a close look at it.

That was the beginning of the end for the tree, said Trought.

“They inspected it and said it was rotting in the trunk and all the branches. The city put it on death row.”

Trought, however, is hoping that he might be able to grow another cherry tree as he took some cuttings from the original and is trying to root them in the hopes of planting them later.

He added he was indeed sad to see the cherry tree go, but that it was nothing compared to how he would feel if a branch had fallen from it and injured someone.