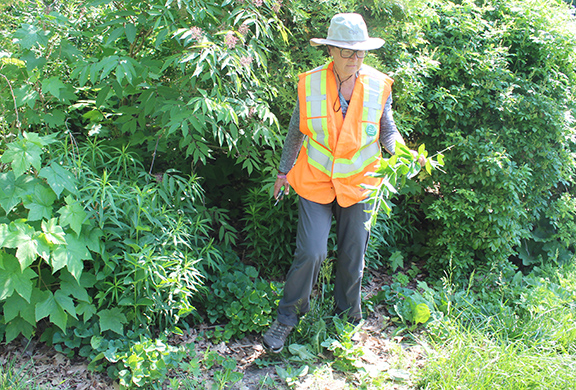 Is the natural way the better way? There is still much debate over whether homeowners should be allowed to turn their front yards into natural spaces. Many people judge these spaces to be “messy” looking and unkempt, so not appropriate.

But, from an environmental point of view, non-native plants, which are found in many front yards, provide little to no food value, shelter and places for mating to native wildlife. And, if they are allowed to grow in natural areas, they can become a direct threat to native plants, especially those that are considered invasive because they spread easily, produce many seeds or damage the soil so that natives can’t grow.

Recently, butterfly ways and pollinator gardens have become popular, as we become aware of the threats to bees from chemicals. Bees also depend on native plants for food sources and in turn provide great benefits by pollinating our fruits, vegetables and flowers. The natural way is being recognized for its benefits to native wildlife.

Two groups in our neighbourhood, the Ashbridges Bay Nature Stewards and the Friends of Glen Stewart Ravine, have both been active for many years promoting care and conservation for these natural spaces.

They have been concerned with the spread of non-native invasive plants and how they reduce diversity and impact native wildlife.

One of the members of Ashbridges Bay, Bob Kortright said, “Non-native invasive species are degrading nature faster and faster in the city as they spread. The sooner we get on top of this, the easier it will be to manage. The longer we take to put enough into controlling them the more costly it will be to do.”

Recently, Toronto Nature Stewards announced the launch of a new Pilot Project that will create teams of trained community volunteers including both Ashbridges Bay Park and Glen Stewart Park, which will care for their own local patch of public ravine land and natural area. Under the direction of Lead Stewards, these teams/groups will remove invasive plants, pick up litter, educate the public and monitor the results. At the conclusion of the pilot, the hope is to be so successful that the program will be expanded.

The Toronto Nature Stewards Pilot was approved by the city on June 4, to begin in four locations. In addition to the two in our neighbourhood, Sherwood Park and Roxborough Parkette started their stewardship projects last week.

This project was a long time in the making. Some of the members of the Steering Committee of the Toronto Nature Stewards (a volunteer group) have been dedicated to restoring ravines and natural areas since the 1970s.

More recently, in March of 2021 the Toronto Nature Stewards, in partnership with the City of Toronto, began training 25 volunteers to become Lead Stewards’ capable of leading volunteers to remove invasive species without direct supervision by city staff. The announcement finally gets boots on the ground at many of the sites, and has been incredibly rewarding to these tireless advocates.

Ashbridges Bay Nature Stewards and Friends of Glen Stewart Ravine were out at their sites on June 9, guiding volunteers on how to best remove dog strangling vine and garlic mustard.

The Lead Stewards, who have been training since March 31, are an enthusiastic and idealistic group. Sylvie Dion, who is leading Glen Stewart Park, finds it hard to contain her enthusiasm when talking about the dangers of these invasive plants and her desire to eradicate them. She sees garlic mustard throughout the city on public land as well as private properties. “It’s hard to control myself and all I want is just to pull it out.”

Clyde Robinson, Lead Steward for Ashbridges Bay, has been leading groups there since 2017. He and his co-lead, Bob Kortright are very experienced in managing invasives, and Bob is a renowned naturalist and expert in all things to do with nature. (The Kortright Centre was named after Bob’s grandfather).

Clyde got his start stewarding for Glen Stewart then began his own group at Ashbridges Bay when he recognized the huge need for restoration in that park.

He is motivated by his concerns that “our ravines and natural areas are facing ecological collapse if we don’t do something. This has been brought on by invasive, mostly non-native plants that remove the proper sources of food for our wildlife.”

Beach residents value nature and the environment. It is why many choose to live here, to enjoy the beach, Kew Gardens, the oak-lined streets and the Glen Stewart Ravine.

Suzie O’Regan, coordinator of the Glen Stewart group, has no doubt the community will come out to support the stewardship efforts in these parks. A mother of two young children, her incentive to take part was “to get involved, give something back, and to help preserve natural areas that my children, family, and our greater community can continue to enjoy for many years to come. I don’t want to lose those spaces.”

This pilot, which spun off from the Ravine Strategy passed by Toronto Council in 2017, gives new authority to community groups to partner with the city to jointly manage these valuable and vulnerable spaces.

Stewardship activities began this week and will continue throughout the summer into the fall. Volunteers are welcome to register with Clyde Robinson, at ashbridgesbaynaturestewards@gmail.com or Suzie O’Regan at friendsofglenstewartravine@gmail.com

Even if you can’t volunteer as a nature steward, the organizers encourage you to Go Native in your own yard. You may discover the joy that comes from bees buzzing around your plants and you may find that native plants have their own fragile beauty.