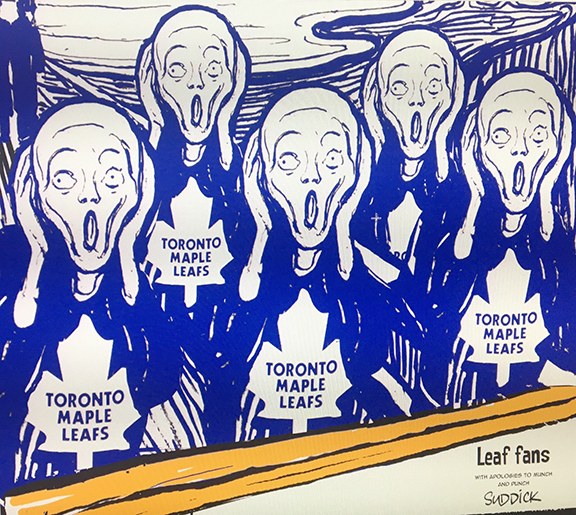 Beach Metro News cartoonist Bill Suddick is not sure when he first drew this cartoon (it is such a recurring theme), but it can serve again as reflecting how Toronto Maple Leafs are feeling after losing in the first round of the playoffs to Montreal this year.

As I listened to the points being made at last Thursday’s (June 10) online meeting regarding the proposal for development at 1631 Queen St. E., a question that came to the forefront for me was: What would the late Jane Jacobs want?

Apparently, at least if you were a speaker at the meeting, she would want exactly what you want.

So, to sum up, Jane Jacobs would not want an 18-storey “skyscraper” in the Beach; or Jane Jacobs would want it because it provides affordable housing for people in a charming neighbourhood with lots of history and nearby urban amenities.

At this point, I was wishing the Leafs were still in the playoffs so I could at least have a second reason to bang my head on the table. (See cartoon by Bill Suddick above.)

Here’s the thing: We don’t know what Jane Jacobs would want and she can’t tell us because she died in 2006. Granted that is not as long as it has been since the Leafs last won a playoff series, but it is a long time nonetheless.

During Thursday’s meeting it was even suggested that we (or perhaps it was Beaches-East York Councillor Brad Bradford who was encouraged to do this) channel our “inner Jane Jacobs” to come to the right decision regarding this proposal. To me this sounds painful and unlikely to actually happen, but these days who knows.

I say this with all the respect towards Jane Jacobs that she rightly deserves for her ground-breaking work on how cities function best and her passionate defence of neighbourhoods against those who would have destroyed them to make room for expressways and vast “tower-block” developments, but we no longer live in 1960s New York City or Toronto.

Times have changed, and I’m tired of every single meeting on development in this city calling up her name in either support or opposition.

That line of argument usually devolves at some point to finger-pointing and name-calling, and the name being called most is NIMBY (Not In My Back Yard).

Inevitably one side will say that Jane Jacobs was in fact the first NIMBY, and she and those who fought the building of the Spadina Expressway through established Toronto neighbourhoods are doing exactly what they are doing today in fighting whatever development is now being proposed in their neighbourhood.

The other side will say the project being proposed is precisely the kind that Jacobs would approve of as it brings people and “street life” to the community. And anyone who says different is a NIMBY!

At this point in the meeting, I wonder what Mitch Marner would do? Probably flip the puck over the glass so he can have a quiet two minutes (or less) in the penalty box.

There are extremely important issues to be talked about when discussing a development plan such as the one proposed for 1631 Queen St. E., and to be fair most at last Thursday’s meeting were there for that purpose. (The story about Thursday’s meeting and the development site is at https://beachmetro.com/2021/06/15/community-meeting-debates-housing-nows-plan-for-18-storey-building-at-queen-and-coxwell-site/ )

A critically important issue regarding this plan is that it not be used as a precedent by other developers looking to build along Queen Street East in the Beach.

The site at 1631 Queen St. E. is unique given it’s location, and the zoning it gets should not in any way be allowed to set a precedent.

The fear that other developers will use it as a justification for taller buildings further east along Queen Street is legitimate, and must be addressed.

We should also all be asking why it is so hard to build affordable housing in this city and province? That’s a question Jane Jacobs would want answered.