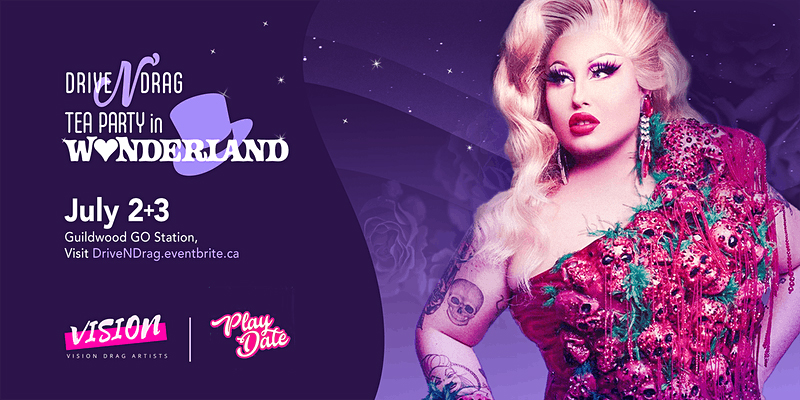 DriveN’Drag: Tea Party in Wonderland will kick off the Beaches International Jazz Festival's 33rd year with a drive-in concert at the Guildwood GO Station on July 2 and 3.

The 33rd annual Beaches International Jazz Festival will feature live concerts in front of audiences of real people this summer, but the centre of the action is moving east along Kingston Road and deep into Scarborough.

A series of drive-in style concerts are being planned for the parking lot of the Guildwood GO station between July 2 and July 24.

The changes are part of the continuing impact of the COVID-19 pandemic which forced the festival to alter the way it operated last summer and how it will take place this year. In 2020, the entire festival went virtual as large outdoor events were banned due to COVID-19 protocols and the City of Toronto not issuing permits for them to take place. The city announced earlier this year that it would not issue permits for a number of major Toronto events this summer either.

Celebrations that cannot take place in their traditional manners this summer, which are outdoor events with thousands if not tens of thousands attendees, include Pride, Taste of the Danforth, the Canadian National Exhibition, the Toronto Caribbean Carnival, and the Beaches Jazz Festival.

“While this year may look a little different, the festival’s values and goals remain the same; to showcase world-class talent, barrier free, while also supporting and featuring emerging and well-known local and international artists,” said a press release announcing the jazz festival’s drive-in concert series.

The concert series at the Guildwood GO Station parking lot begins July 2 and 3 with DriveN’Drag: Tea Party in Wonderland. It will take place between 6 and 9 p.m. and feature a 90-minute choreographed show split into two parts. It will feature a “stellar cast of Toronto Drag Artists from Vision Drag Artists.” Also featured will be BOA from Canada’s Drag Race as the Mad Hatter.

Other drive-in concerts slated as part of the jazz festival line-up will include The Richards Group Block Party on July 16, the Afrofest Showcase on July 17 and 18, and the OLG Main Stage on July 23 and 24.

Also, as it did last year, the jazz festival will present a number of virtual performances for fans to enjoy online as part of the TD Virtual Concert Series from July 14 to 16.

Those wishing to attend the drive-in concerts at Guildwood GO Station, 4105 Kingston Rd., must register in advance as parking spaces are limited. One ticket is required per vehicle, which may have as many people inside as there are seatbelts. Vehicle admission tickets start at $40. COVID-19 safety protocols will be enforced during all of the drive-in performances.

The Q107 Canada Day concert in Woodbine Park, another traditional part of a Beach summer, will also be heading to the Guildwood GO Station parking lot for a drive-in concert on Thursday, July 1.

There will be two show times for this event slated, with the first concert from 2 to 6 p.m. and the second from 7 to 11 p.m.

On the slate will be tribute performances honouring Alanis Morisette, Tom Petty, U2, Journey, Black Sabbath, and Queen.

The same rules apply regarding tickets as they do for the jazz festival events. For more info on tickets, please go to www.Q107CanadaDayFest.com