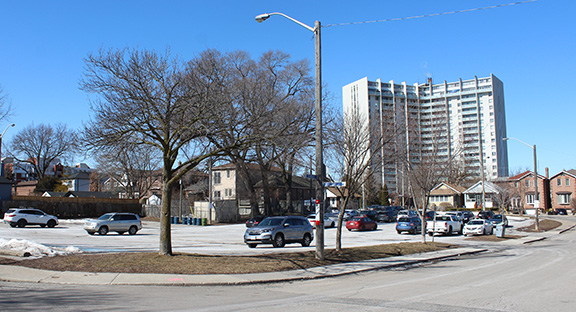 A three-storey modular housing building for people exiting homelessness is proposed for this site at Trenton and Cedarvale avenues in East York.

The supportive modular housing plan for East York’s Trenton and Cedarvale avenues area received approval at a city committee late last month and is expected to be given final approved by Toronto Council this week.

The proposal for the three-storey building for people exiting homeless has raised concerns among some East York residents.

The modular housing build – which allows the construction of the building faster than usual – will have approximately 64 studio apartments, self-contained, with a twin-bed, private kitchen, and bathroom. The building will also include a laundry facility, a public kitchen and dining area, program space, and administrative offices. Those living in the building will have supports in place to help them as they try to move on from homelessness.

The plan has been the subject of a number of online community meetings with concerns about loss of parking given the site proposed for the building is currently a parking lot; higher volumes of on-street parking and related safety issues for pedestrians, cyclists, and children in the area given there is an elementary school and sports fields across the street.

Beaches-East York Councillor Brad Bradford said the recent approval of the proposal by Toronto’s Planning and Housing Committee takes into consideration some of those concerns.

“There’s an urgent need for housing in Toronto and this proposal will get people out of tents and into long-term stable housing. The project has moved quickly but there has been, and will continue to be, extensive consultation with the community,” Bradford told Beach Metro News.

“The process has all of the steps of a regular development application, including a lot more community consultation than would be typical. We’ve had dozens of meetings with residents in the local area and set up a Community Liaison Committee to make this project a success.”

The final approval is expected when Toronto Council meets on June 8 and 9.

Bradford added that council’s decision is not the final step in the process. “There are still lots of details to resolve, including fine-tuning the parking plans for the area, implementing feedback to address safety concerns, and adding new road safety features in the neighbourhood.”

A similar modular housing facility for people exiting homelessness has been operating at 11 Macey Ave. in southwest Scarborough since December of 2020.

Neighbours in the area also had many concerns when the plan for the building was first announced a year ago.

In a recent letter to neighbours in the West-Oakridge neighbourood where the Macey Avenue building is located, Eric Stark wrote that many in the community were still “resentful about the way the city and province imposed these projects on our communities without meaningful consultation or chance to appeal.”

That was also a concern expressed by neighbours of the East York modular housing proposal.

In his May 29 letter, Stark also outlined some issues surrounding the Macey Avenue housing that has neighbours worried including frequent police calls to the address and the condition of a nearby parkette. He said those challenges are in “stark contrast” to the messaging neighbourhood residents received from the city regarding the facility.

However, Stark took issue with a recent story in a Toronto daily newspaper that he said painted a picture of the situation at the building at 11 Macey Ave. that he didn’t believe “was entirely accurate” when it came to problems in the area.

In a June 5 email, Stark wrote:

“Yes, every community has its neighbourhood issues, and yes there are residents of 11 Macey that sometimes require assistance with the challenges they face. And to be sure, those neighbours living closest to the project have encountered some disruption to their lives. These issues, however, should not be blown out of proportion. Doing so is a disservice to our neighbourhood community.”

A group called East York Cares is hoping Toronto Council will delay final approval of the building in order to more fully address community concerns, especially around safety issues, and Stark is supportive of their efforts.

“I hope city councillors learn the importance of working with local communities ‘before’ making final decisions on the locations and configuration of social housing projects city staff initiate, and reflect community concerns in their voting at city council meetings,” wrote Stark. “East York Cares has valid concerns and they should be addressed.”