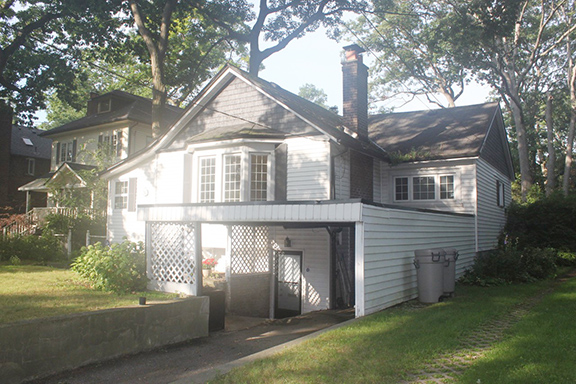 The photo above shows the home that used to exist at 36/38 Blantyre Avenue. Inset photo shows the two homes that are now on the property.

More trees won’t be coming down at a newly constructed home in southwest Scarborough, after residents raised concerns to the local councillor.

Residents living in the neighbourhood around Blantyre Avenue raised concerns after a property was split in two and the construction of two new homes led to the removal of six trees on the lot.

The neighbourhood nestled between the Beach and Scarborough-Southwest is known for its high tree canopy consisting of bur oaks and red oaks. Oak trees generally take up to 30 to 40 years to mature to the sizes seen on the street, which is why residents raised the issue about them being cut down.

They additionally wonder why the “usual hoops”—following municipal bylaw regulations, getting permits to remove trees, having an arborist report—did not seem to be applying to the properties at 36 and 38 Blantyre Ave.

“People who want to renovate their home here, they’re really bound by the trees in that we have to do a lot to protect them,” said Jennifer McLean. “There’s an expectation from the city and urban forest management, you need an arborist report, you have to pay a bond, etc…”

McLean was one of more than 153 residents who signed the petition sent to Scarborough-Southwest Councillor Gary Crawford on the issue. The petition, signed by neighbours from Blantyre Avenue and nearby streets, called to halt the removal of the “four remaining trees on the lot” at 38 Blantyre Ave.

An application for the tree removal was in place as of May 19, the trees were to be removed so the homeowner could install a pool. As six large oak trees had already been removed from the lot, neighbours said removing more to a total 10 trees “is outrageous.”

Crawford’s office confirmed to the Beach Metro News that it was aware of the issue.

“We did receive the letter and petition, and reached out to urban forestry,” Crawford said. “Subsequently, the permit to remove the trees was denied.”

“The application was to remove them for a pool, these are two new builds,” he added.

The original property at the unsevered lot of 36/38 Blantyre Avenue originally had one house on it. The property is alleged to have been purchased by private investors who severed the land to construct two new homes. While neighbours didn’t object to the new homes, they were concerned when giant oak trees started coming down.

“At the Committee of Adjustment (in January 2019), the representative for the developer said they approved five trees opposed to the initial 10,” McLean said. “In the midst of the build however, an additional tree from the front lawn was taken down.”

That tree was replaced with four new trees, the sizes of which pale in comparison to the mature oak trees which were removed. That led the total trees removed to six. With the recent application to remove four trees on 38 Blantyre Ave., the total would have been 10.

Residents said they welcome new families to the neighbourhood, and understand the City of Toronto’s urban densification goals, as seen in new builds across the city.

Their issue is with the tree removals.

As 36 Blantyre Ave. is up for sale—just seven or eight months after its construction—flipping a property on the market after removing the trees sets a precedent that does little to protect more trees in the neighbourhood from being removed, some residents said.

“We feel a stewardship to the trees,” McLean said. “When, as homeowners, we try to improve our property either to build or renovate, we have to jump through hoops.”

Neighbours are frustrated because of what appears to be a “free pass to clear cut 10 trees” for these new builds.

“Since the letter, we’ve learned urban forestry denied the four trees coming down,” McLean said. “The issue remains that the law’s not clear, there’s a bylaw that protects the tree with a fine of up to $100,000.”

She said neighbours are caught in an “unclear process” as to why municipal bylaws for trees appear not to have been enforced.