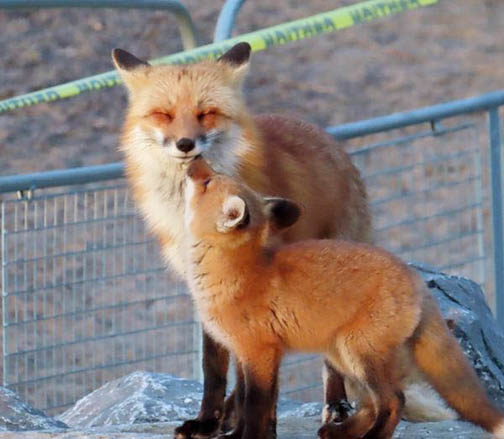 This photo of the fox vixen and one of her kits was sent to Beach Metro News by a local resident earlier this spring. The Toronto Wildlife Centre is reporting that two of the kits were found dead near the den on the morning of May 15.

The Toronto Wildlife Centre (TWC) says two fox kits were found dead near their den under the Boardwalk in the Beach on Saturday, May 15.

“2 fox kits were sadly found dead early this morning in an area close to the Beaches fox den. There’s currently no evidence to suggest this past week’s acts of vandalism were directly linked to the death of the kits. Once we have more information, we will tweet an update.”

The act of vandalism referred to in the post relates to incidents from late last week in which the surveillance camera placed in a tree near the fox den was taken down, and the home of local TWC volunteer was vandalized. Police are investigating those incidents.

The TWC said the two dead fox kits were found on the morning of May 15. The cause of death is not known.

This is the second year in a row that a fox kit has been killed near the Boardwalk den.

On the weekend of May 16, 2020, a kit was found dead near the den. At that time, TWC said the kits wounds were consistent with a “large predator attack” and they said it was more likely to have been from a large dog than from a coyote or coywolf.

In an email interview with Beach Metro News late last week, Beaches-East York Councillor Brad Bradford had stressed the need for people to stay away from the foxes and to keep their dogs on a leash.

“Let’s show these animals the respect they deserve,” he said. “Please keep away from the fenced-off area and keep your pets on a leash at all times.”