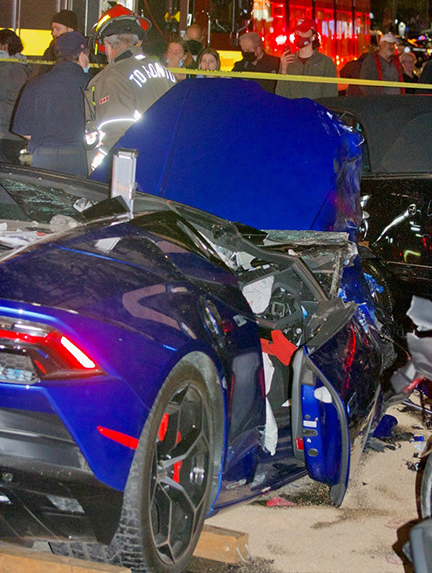 The driver of a blue Lamborghini collided with a parked SUV and a streetcar last night on Queen Street East near Maclean Avenue. A woman passenger in the Lamborghini was taken to hospital for treatment. The extent of her injuries are not known at this time. Photo by Les Jones.

A woman passenger in a car that was involved in a multi-vehicle collision on Queen Street East near Maclean Avenue in the Beach on the night of Wednesday, May 12, was taken to hospital to be treated for her injuries.

Police are still investigating the crash and further details on the woman’s condition, and what if any injuries were suffered by the driver of the blue Lamborghini involved, are not available at this time.

According to a witness on the scene, the driver of a blue Lamborghini attempted to overtake a streetcar on Queen Street East just before 9:30 p.m. and then struck a parked SUV. Another parked car was also hit and pushed up onto the sidewalk. The streetcar was also struck in the crash.

The woman taken to hospital is believed to be in her 30s.

The crash is under investigation, and anyone with information is asked to contact Toronto police Traffic Services at 416-808-1900.