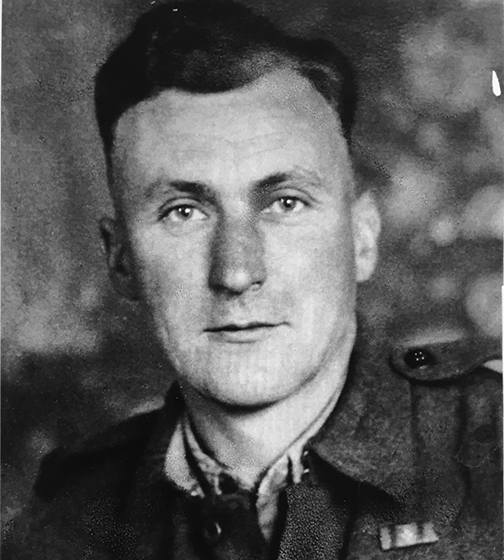 William Davidson served with the Canadian Army in the Second World War and took part in the liberation of Holland. Photo: Submitted.

Ken Davidson sent the letter below to Beach Metro News late last month. He found it among the papers of his late father William Davidson who served with the Canadian Army in the Second World War and took part in the liberation of Holland.

The liberation is celebrated in the Netherlands on May 5.

This letter was written in 1980 as part of the Thank You Canada campaign marking the 35th anniversary of the liberation. William lived on Bexhill Avenue in southwest Scarborough.

“The undersigned, by the grant of orange-red tulips from the Netherlands, expresses his thankfulness and gratitude towards W.R. Davidson who dedicated himself to the liberation of the Netherlands,” the letter begins.

It was written by Coby and Henk Mik-Schutter from Gorinchem, Holland, on Sept. 29, 1980.

The letter reads in part:

“The other day we received your address from the foundation Thank You Canada.

“First of all we will thank you for your risking your life for liberation!”

It then mentions the tulips being sent by the foundation. Coby and Henk identify themselves as a married couple ages 34 and 40 and talk a bit about their jobs.

“When you liberated Amsterdam, my wife was five years old and lived at Amsterdam, and she can remember the festivities at that time very well.

“She and her family suffered very much from hunger, and if the war had taken any longer they would have died all of them…

“On television we saw festivities at Amsterdam on the 5th of May this year with about 1,200 Canadians. They entered Amsterdam as you did enter Amsterdam at that time.

“It was very nice to see how they were welcomed enthusiastically by old and young people and so many years after the war. You see that we have not forgotten our liberation. I think such activities are very good for our generation. We hear and learn what it is when you have no freedom and hunger and so on.

“We are not able to realize what happened at that time. And therefore we have to be grateful still that we have our freedom again.

“And I think it is very pity that after two World Wars so many countries do not have freedom at all.”