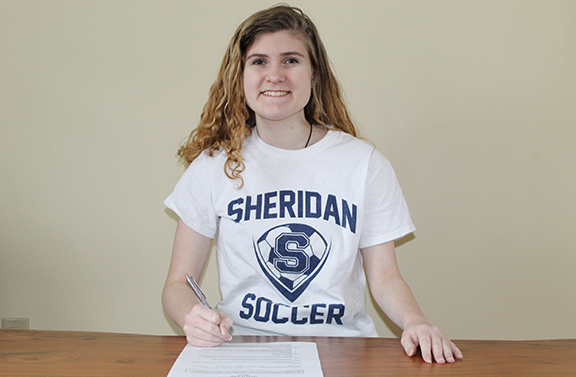 Beach resident Megan Coyle will be lacing up her soccer boots for the Sheridan College Bruins Women’s Varsity team next fall.

Coyle, 18, has been playing high-level soccer since the age of seven as a member of a number of teams including Olympic Flame, Wexford T-birds, and North York Cosmos.

She signed her letter of intent to play with Oakville’s Sheridan College earlier this month.

Coyle said she is excited to be continuing her soccer career in the Ontario Colleges Athletic Association with the Bruins.

“Coach Paul (Angelini) has informed me that I will be playing on the wing and he has said that I will make an immediate impact with my speed, fitness and leg strength,” Coyle told Beach Metro News.

Along with the chance to play with the Bruins who were third in the OCAA’s West Division in 2019 (the last full season due to COVID-19 restrictions), Coyle chose to attend Sheridan because of its highly regarded athletic therapy program which she will be studying as part of applied health sciences.

“I decided on Sheridan College due to their athletic therapy program which is the best and first program of its kind in Canada,” she said.

Coyle first started playing soccer with the Beach Community Soccer League when she was four years old, she then played with East York for two years before joining Olympic Flame.

“In 2017 I joined the North York Cosmos 2003 rep team and I have been on it ever since. My coaches Zack Wilson and Mark Colvin gave advice on how to contact university and college soccer coaches and entered the team into international and regional tournaments and showcases,” she said.

“At the Trent University Women’s Showcase I was scouted and approached by head coach Paul Angelini of the Sheridan Women’s Varsity team.”

Coyle said her Cosmos coaches were especially helpful in making her the top-level player she is. “Zack Wilson and Mark Colvin have been incredibly supportive and have always pushed me to be my best,” she said.

Her parents Susan Gattoni and Wayne Coyle have also been extremely supportive of her playing soccer, said Coyle. “Both my family and I are very excited about this opportunity.”

Coyle also has an older sister Shannon, 20, who attends the University of Ottawa studying biomedical neuroscience and also plays with the North York Cosmos in the Ontario Women’s Soccer League.

Growing up near Main Street and Kingston Road, Coyle attended school locally at Williamson Road, Glen Ames and at Malvern Collegiate where she graduates this year.

As youngsters Coyle took gymnastics and in school played other sports including basketball, softball, cross country and track and field.

“I also trained in karate up to my blue belt test. I took dance classes since I was three and eventually danced competitively until I was 12, before focusing only on soccer,” she said.

Among the soccer tournaments Coyle remembers playing in as a youngster is the Robbie International Tournament based out of Scarborough.

“I did play in The Robbie with the T-birds,” she said. “I remember it being a highly competitive tournament that gave us the opportunity to play against some high-calibre teams from other cities whom we normally didn’t play against. It also stood out because it was a charity tournament (raising funds for Cystic Fibrosis Canada).”