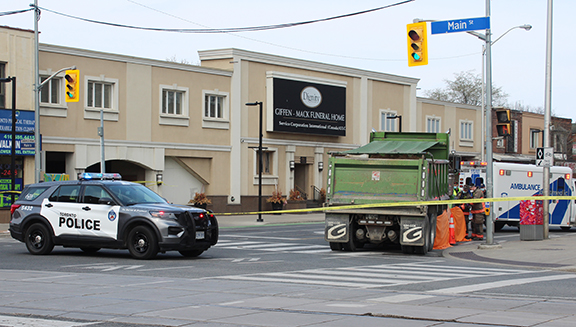 Police are investigating after a woman in a wheelchair was struck and killed by a dump truck this afternoon at Main Street and Danforth Avenue. Photo by Alan Shackleton.

A woman in a wheelchair has been struck and killed by a dump truck turning from Main Street onto Danforth Avenue.

The incident took place at approximately 3:15 p.m. on Tuesday, April 27, on the southeast corner of the intersection.

The green dump truck remained at the scene of the incident, and orange blankets covered the underside of the vehicle and its wheels.

The truck was making a right turn from northbound Main Street to head east on Danforth Avenue.

There is a large police presence in the area while the incident is investigated.

The closures are expected to last for a long period of time.

There is no further information on the victim at this time other than that she was female and in a wheelchair.