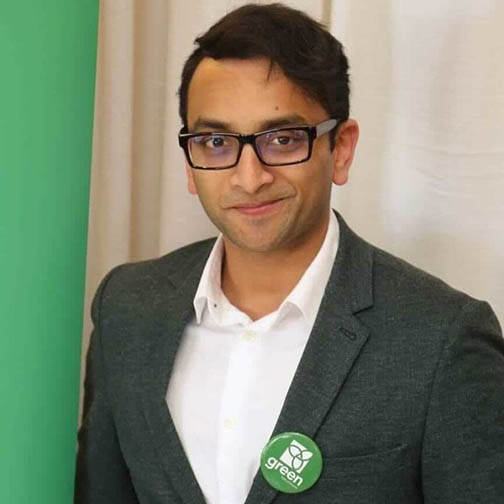 Abhijeet Manay has been nominated as the Green Party of Ontario’s candidate for the Beaches-East York riding ahead of next year’s provincial election. Photo: Submitted.

Manay was elected as Deputy Leader of the Green Party of Ontario in 2018 and presently serves as the party’s shadow cabinet critic for Health and Long-Term Care.

The Green Party of Ontario announced his nomination for the Beaches-East York riding in an April 20 press release.

Manay works in learning and evelopment at Reena, a non-profit that works with people with developmental disabilities where he designs and teaches courses, and sits on the board of directors of the non-profit iREAM.

He completed his Hons. Bachelor of Science at McMaster University and his Masters in Education at the University of Toronto.

”I was inspired to join politics by my grandfather who was a Member of Parliament back in India. His example inspires me to this day to always fight for the little guy,” Manay said in the press release.

“That’s why I joined the Green Party of Ontario: because Mike Schreiner’s drive for justice and sustainability reminds me of the same passion my grandfather had. It’s an honour to be in a party that’s creating a greener and more caring Ontario for generations to come.”

Manay has a deep understanding of Toronto issues, said the release, where he grew up after arriving in Canada from India at the age of 14. He is a life-long advocate for affordable housing, small businesses and a guaranteed livable income.

“Abhijeet has served the Green Party admirably as Deputy Leader. It’s a pleasure to work with him, and I look forward to working with him at Queen’s Park,” stated Mike Schreiner, Leader of the Green Party of Ontario. “His passion and energy for issues like affordable housing, autism and health care is exactly what we need to build back smarter out of the current crisis.”

The Beaches-East York provincial riding is currently held by NDP MPP Rima Berns-McGown, who defeated Liberal incumbent Arthur Potts in the 2018 provincial election. Potts had held the seat for the Liberals from 2014 to 2018. Prior to that, the Beaches-East York riding had been held by Michael Prue of the NDP from 2001 to 2014.

Premier Doug Ford and his Progressive Conservative party were elected to a majority government in June of 2018. The next provincial election is not expected to be held until June of 2022.

Along with Berns-McGown and Manay who will be running in the June provincial election in Beaches-East York, former local councillor Mary-Margaret McMahon was named the candidate for the Ontario Liberal Party in the riding in November of last year.