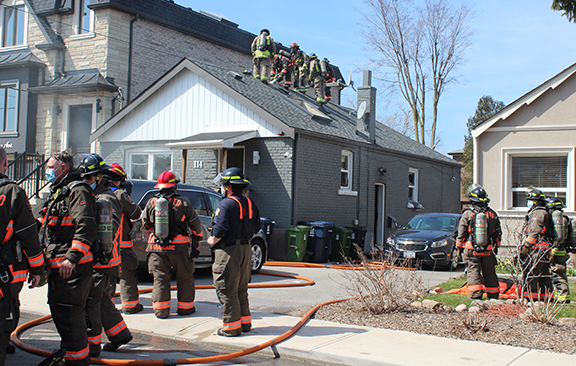 Firefighters vent smoke through the roof of this house fire on Denton Avenue on the afternoon of Wednesday, April 7. Photo by Alan Shackleton.

No one was injured in a house fire in southwest Scarborough this afternoon.

Toronto firefighters were called at 2:09 p.m. on April 7 for reports of smoke coming from a house at 114 Denton Ave., northeast of Danforth and Pharmacy avenues.

When fire crews arrived, all occupants were out of the house and no injuries were reported.

Numerous firefighters and trucks responded to the one-alarm blaze.

There was heavy smoke on the scene of the active fire, which is believed to have started in the basement of the detached bungalow, when firefighters first arrived.

The cause of the fire is under investigation.