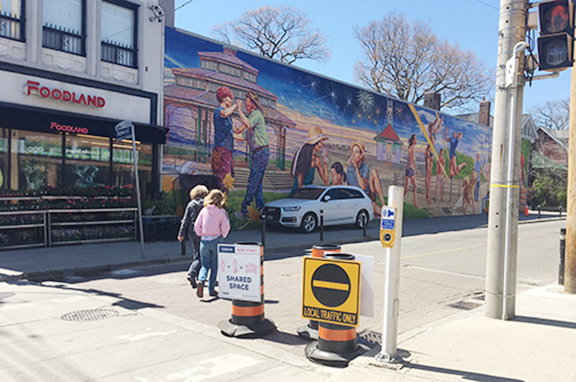 Lee Avenue in the Beach was designated as a Quiet Street in 2020 as part of Toronto's ActiveTO initiative. Photo by Alan Shackleton.

ActiveTO is coming back to East Toronto – and the rest of the city – after a successful campaign last year to get people outside safely.

The program was introduced in May 2020 as a response to COVID-19 and the need for physical distancing to reduce the spread of the virus. It was hugely successful, local councillors said, and it’s coming back for 2021.

The city recommends a return to the Major Weekend Road Closures – which in the East End included Lake Shore Boulevard East from Leslie Street to Woodbine Avenue. In addition, a similar pilot project to that which allowed for cycling and CafeTO patios on Danforth Avenue is slated for Yonge Street.

One thing that is missing this year is the city’s Quiet Streets program, which in 2020 designated various streets such as Sammon Avenue in East York and Lee Avenue in the Beach as shared space for people to walk, run, and cycle while maintaining physical distancing. City staff does not recommend the return of the program in its current form.

“But there was definitely a mixed response from communities, not just in Beaches-East York but across the city,” Bradford said.

“Lots of residents wanted measures that would be more effective or permanent to calm traffic,” he added. “The idea in the staff report is to refocus the energy this year on making more permanent, impactful measures in the areas that want them.”

Fletcher said it was popular among her constituents, but said the Quiet Streets designation at Monarch Park and Woodfield Road will be reviewed in a community consultation for a possible shared cycling lane.

“I’m sad Quiet Streets didn’t make it back, I think they were highly successful,” she said.

“I think folks who live on those streets will miss it. It did bring people out. It made folks congregate, meet their neighbours; they even had little barbecues on Sammon Avenue.”

ActiveTO has two main functions: To allow people to be outside while giving them the space to maintain physical distance, and connect and expand Toronto’s cycling network by installing temporary bike routes that mirror major transit lines.

The details for 2021 are still to be determined in the coming months. It will depend on construction impacts, input from local councillors, and the future resumption of large-scale events. There were 25 consecutive Major Weekend Road Closures from May to October 2020.

The city conducted a survey of residents who took advantage of the ActiveTO closures and found that 92 per cent wanted the closures to continue during and after COVID-19. In addition, 75 per cent of residents surveyed reported being more active.

One quarter of those surveyed reported the closures helped them start or restart riding a bicycle.

Fletcher is still committed to bringing some form of Quiet Streets back to the East Toronto area, she said.

“I think we’ll have questions about Quiet Streets when we’re back at committee and then council to see why we can’t.”