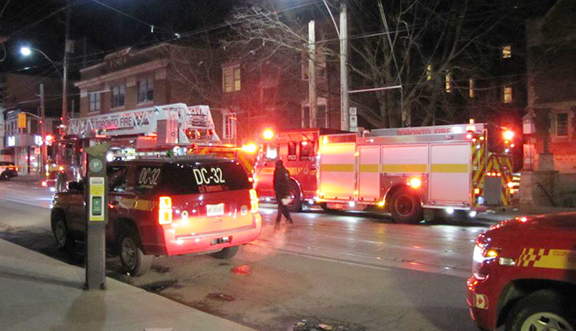 Fire crews were on the scene at the Kew Beach Mansions at 2163 Queen St. E. on the evening of March 15. Photo by Alan Burke.

Two people were taken to hospital for treatment after a fire at a residential building in the Beach last night.

The fire took place at the three-storey Kew Beach Mansions apartment building at 2163 Queen St. E., just west of Lee Avenue, at approximately 7:45 p.m. on Monday, March 15. The apartment building is located between the Beaches library and the Coles book store.

Toronto Fire says two people, a male and a female from the unit where the fire is believed to have started, were transported to hospital for treatment.

It had been earlier reported that four people in total were taken to hospital for treatment, but Toronto Fire could only confirm two people hospitalized and another person treated at the scene for minor injuries.

Heavy smoke was reported in the hallways of the building at the time of the fire.

The fire broke out in a downstairs (A) unit of the building. On March 16 morning, the hallway where the unit is located on the east side of the building was dark and without power, smelled strongly of smoke and appeared to have suffered severe damage.

The downstairs units of the building are only slightly below ground level, with only a few steps to walk down from the front entrance to the hallway.

Queen Street East between Hambly and Wheeler avenues was closed while firefighters dealt with the blaze last night.

TTC buses and streetcars were used as temporary shelters by residents evacuated from the building.

Most residents were back in their apartments by approximately 10:30 p.m. on March 15.

Cause of the fire is not known at this time.