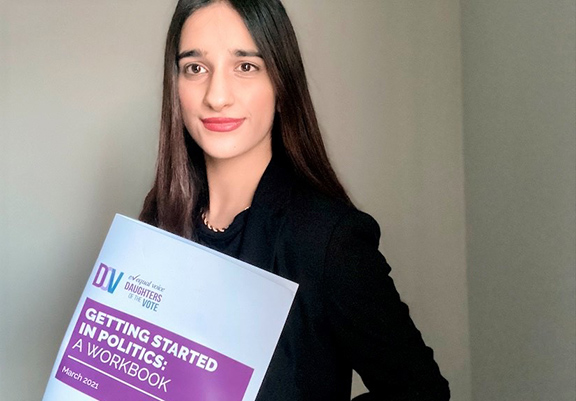 I decided to take part in a Canadian program  called  the Daughters of the Vote (DOV) that was put together by Equal Voice.

The DOV is a political summit that lasted four days (March 5 – March 8). This program allowed me and 337 other emerging young female leaders across Canada to represent political ridings.

Throughout the four days I got to represent a riding while doing a stimulation of a parliamentary committee, got to participate in panel discussions and workshops. This program allowed me to connect and learn from various Canadian political female leaders. They shared their career stories, challenges they overcame and advice for young females like myself.

One of the female leaders who stood out to me was Rachel Curran, a Public Policy Manager at Facebook. While talking to her I found myself learning about the possibilities of females in leadership roles. Something she said during the DOV Working in Politics panel was that “by doing the job, we make the change”.

Just a few words, but they had left me feeling empowered.

This program motivates and encourages young female leaders like myself to take on leadership roles despite gender norms. Throughout history and even today in our society it has not been easy for females to take on political and leadership roles due to challenges and gender biases in the workplace and education system.

These challenges and gender biases can diminish a person’s self-esteem, make them lose opportunities and can silence their voice.

Therefore, it was incredible taking part in a program that motivates young female leaders like myself  to put themselves out there and take on leadership roles in their community.

The lessons I learnt from the DOV summit will stay with me forever.

I would like to pass them along to other young females living in the Beaches-East York community. It is so important that they always remember that their voice matters, that they deserve a role just as much as anybody else and to take risks.

Most of all,  I hope other young female leaders like myself in the community who are passionate about politics and leadership take part in this program in the future.

It will provide them with the advice and tools to be successful in politics and leadership roles.  In addition, it will allow them to connect with like-minded females from across the country.

In honour of International Women’s Day, which is today (March 8) I hope that females across Beaches-East York remember the power that they have to make a change in the community, how they matter and to use their voice.

Anika Munir is a recent graduate of East York Collegiate