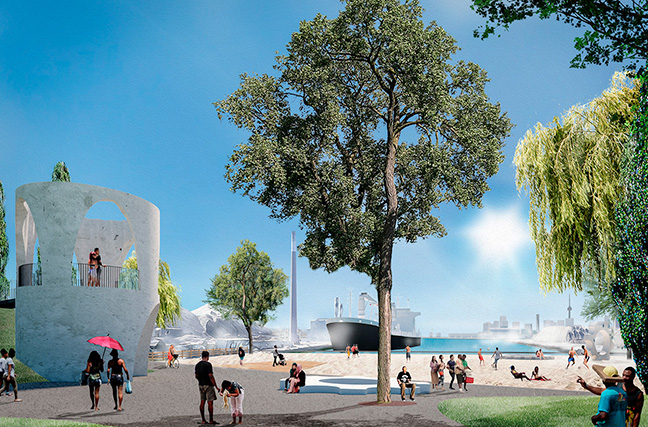 Image above shows what the Leslie Slip Lookout Park in the Port Lands could look like. Inset photo shows the site as it now looks.

East Toronto residents are invited to learn more about plans for the Leslie Slip Lookout Park at a community consultation meeting set for the evening of Monday, March 1.

The online meeting takes place from 6:30 to 8 p.m. and is being hosted by Toronto-Danforth Councillor Paula Fletcher and CreateTO.

The plan for the park is part of the much larger redevelopment of the entire Port Lands.

The Leslie Slip Lookout is located on the west side of Leslie Street between Commissioners Street and Unwin Avenue. The slip is the far eastern end of the Ship Channel that runs through the Port Lands.

The proposal for the new park will include a beach, green space and an elevated lookout providing a view of the entire Ship Channel. At the moment, the area is still very industrial and the site where the park will be is home to an equipment rental company and is just northeast of a site for unloading aggregates.

The designers of the Leslie Slip Lookout Park are Claude Cormier + Associés (CC+A). They have also designed other public spaces in Toronto including Berczy Park and Sugar Beach.

“Leslie Slip Lookout Park embraces the look and feel of its industrial context, re-identifying the landscape of labour and work into one of play and recreation,” said Claude Cormier in a CreateTO press release earlier this month.

“The park will aim to deliver an unfamiliar vantage of being immersed in a landscape that is oversized, brutal, and surreal. The balance of open spaces proposed for Leslie Slip Lookout Park creates a place for all tastes in one of Toronto’s most curious landscapes.”

In November of 2018, the federal government, the City of Toronto, Waterfront TO and the Mississauga of the New Credit First Nation held the official groundbreaking of the Portlands Redevelopment Project. Work is now well underway on the project that will transform the Port Lands by creating a naturalized river valley for the Don River as it empties into Lake Ontario, new public spaces, roads, bridges and utilities, and residential and commercial space on a new island.

This Leslie Slip park will be an important part of the project along the Leslie Street Green Portal (the north-south corridor connecting Tommy Thompson Park).

“The creation of Leslie Slip Lookout Park on Toronto’s eastern waterfront is something that residents and tourists from across the city and beyond will be able to enjoy for years to come,” said Mayor John Tory in the release.

“Revitalizing this underutilized land will bring this site back into public use, beautify the landscape and complement the natural heritage system of the Port Lands, creating a stronger connection between the city and the natural areas south of Unwin Avenue and Tommy Thompson Park,” she said in the release.