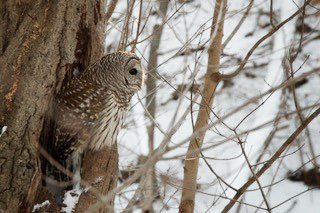 Martin Fischer took the above photo of an owl in the Small's Creek Ravine. Inset image shows a Google map of the ravine, split by the railway tracks.

I like to think I love mighty oaks as much as anyone (I’ve even been known to forest bathe).

I’m also a lifelong admirer of the barred owl and its enigmatic “Who Cooks For You?” Hearing one hoot steps from my home on a frosty February night stroll, and seeing a photo (possibly of that same owl) taken recently in Small’s Creek Ravine, will remain memories of COVID winter.

It’s an understatement to say it roils the sleep to know an owl neighbour and 268 trees of his or her habitat are in clear and present danger.

But threats to iconic signs of life’s magic weren’t what sucked me into the controversy over plans to widen Metrolinx’s Lakeshore East (LSE) corridor as part of GO Expansion. I’m in because I have a long memory, a history with that stretch of the tracks.

I’m may be no Ed Levy or Steve Munro, but I too have despairingly followed Toronto transit issues closely for decades, including apparently forgotten concerns over widening the same corridor, not so many years ago.

It’s great that Metrolinx wants to add a fourth track from the Don to Scarborough Junction. It will enable 15-minute all-day two-way GO service on the line out to Whitby and Oshawa (and Bowmanville eventually), as well as on the Stouffville corridor, up through Kennedy station, Agincourt, Unionville and Markham. It’s a long-overdue regional project and locals battling to save the Small’s Creek and Williamson ravines won’t make any useful friends by fighting it.

Residents on both sides of the tracks between Coxwell and Woodbine avenues were right to ask if postpandemic transit demand will justify a fourth track, but I’d tell them that respected transit professionals have seriously studied the same question and have concluded we should do this.

Locals are also right to demand that Metrolinx do all it can – and prove it’s doing all it can – to minimize damage to the ravines, a single ecosystem that has suffered horribly for decades from the CNR’s long-ago decision to sever them with a solid rail embankment.

Alas, anyone who knows the history and sat through the recent online “public consultation” will doubt that Metrolinx (GO’s step-parent and Queen’s Park’s allegedly arm’s-length transit-planning agency), has thought much beyond how to sell a quick and dirty plan to clear-cut ravine slopes.

Metrolinx’s knack for earning public distrust is well established region-wide. Weston residents endured condescension over issues with the Union-Pearson Express through their neck of the woods. It was clearly rotten that the agency was willing to ignore evidence and recommend a Kirby GO station at the behest of then-transport minister and now Ontario Liberal Leader Steven Del Duca.

And how far can reasonable people trust a public agency that hires social-media influencers to lend support to controversial projects, or that insists on fast-tracking tunnelled subway extensions when even its own torqued business-case analyses say costs will badly exceed benefits?

Locally, Metrolinx and GO’s reputation as a lousy neighbour is also solid. For more than 50 years, excessively loud diesel-hauled trains have roared past, silencing outdoor conversation and rattling houses without stopping to offer any service.

Even GO’s long-term strategy in older Toronto’s east end (and in southwest Scarborough) is to stick with exurban station spacing on one of the most urban stretches of its network. (For people in the Small’s Creek area, GO Danforth station at Main Street is too far east to be useful and the proposed Gerrard station on the Ontario Line (if ever built) is too far west.

Metrolinx, when it was created in 2006, also inherited east-end bad-will – noisy all-night construction to add a third track to the corridor was keeping many locals awake.

It should be noted also that, when GO held “public consultations” about adding that third track, I asked whether planners were sure three would be enough, especially given that Super GO (a 1974 study on electrifying the Lakeshore corridor), recommended expansion to five tracks.

GO staff insisted they’d looked at the long term and had decided they would “never need” more than three (one GO expert told me back then he had never heard of the Super GO report and aggressively challenged me to produce a copy, which I did).

It’s apparent, if you look at the bridges over Warden and Danforth avenues, that GO could have saved some capital if it had tried to even prepare get it right the first time.

Should we now trust that Metrolinx is going to get it right on the second effort, with four tracks, because it’s new experts claim they’re “thinking 25 years ahead”?

And if Metrolinx really is thinking that far ahead, what is it planning to do with all the capacity it’s creating on the LSE and Stouffville corridors. GO Expansion and Via Rail combined won’t need more than 20 trains an hour at peak, and there are four-track stretches in other cities doing 40-plus trains an hour.

Exploited fully, we might be able to save a few billion by not building the apparently sacrosanct Scarborough subway extension. Then again, Metrolinx may have been tacitly empowered to ignore communities along its routes. But long term, it’s in Metrolinx’s interest to start trying to win the public’s trust, locally and region-wide.

Here’s a couple of points to consider in closing if Metrolinx is even somewhat amenable to the idea of honestly working with communities throughout its network.

First, this project is a chance for Metrolinx to start giving back a little to the community by connecting (or reconnecting) Wildwood Park with Merrill Bridge Park and the Small’s Creek and Williamson ravines (see map).

Also, the 1974 Super GO report that was news to GO, Metrolinx and Mayor John Tory’s SmartTrack planners called for stations at Coxwell and Warden, something that appears to make a lot of sense.

There are opportunities. So please don’t force me to have to write about trying a third time to get this project right, in 2035 or whenever.