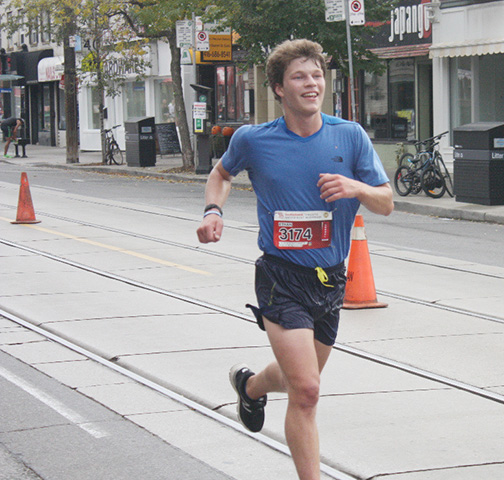 Ethan Peters is seen running along Queen Street East in this photo from the 2019 Scotiabank Marathon. On Sunday, Feb. 28, Peters will be running the hills of the Beach between Kingston Road and Queen Street East to raise funds for the Centre for Addiction and Mental Health (CAMH). Photo: Submitted. Inset image showing the route of the run was created by Hannah Willis.

Imagine running the hills of the Beach, up and down every road between Queen Street East and Kingston Road twice, for a total of 111 kilometres. Then imagine saying you are going to do it all in under 12 hours.

That is exactly what Ethan Peters is planning for Sunday, Feb. 28.

Peters let Beach Metro News know about his plans for the run to raise funds for Toronto’s Centre for Addiction and Mental Health Foundation (CAMH), earlier this month.

When he is not working at home, he is out running, either by himself or with his dog.

Peters said the COVID-19 pandemic has made it even harder for people with mental health issues, especially those who live alone, and that is why he wants to raise funds for and awareness of CAMH.

“It’s facilities like Toronto’s Centre for Addiction and Mental Health where people can find the help they need. They provide a diverse network of clinical care support programs with the goal of effective personalized treatment. This run is a way to raise funds in support of CAMH and their cause to help overcome mental health problems,” he explained. Peters chose to run the hills of his neighbourhood because he wanted to do something different; something that will catch people’s attention.

With some of the hills extremely steep, Peters will be dealing with a total elevation gain of 1,381 metres during the run.

He has marathon experience under his belt, as he ran two ultra marathons which are more than100 kilometres long, a 100 mile (160 kilometre race), and another 125 kilometre trail race.

Readers may be wondering with of the local streets he considers hardest hill to run on, and he has three in mind.

“It really depends on the day, but Willow is one of my favourite and most challenging hills to run on. I like it for its length and slope. The second one is either Pine Crescent and Glen Manor, which are longer than Willow.”

To make donations to his campaign, please go to www.gofundme.com/f/hills-for-health