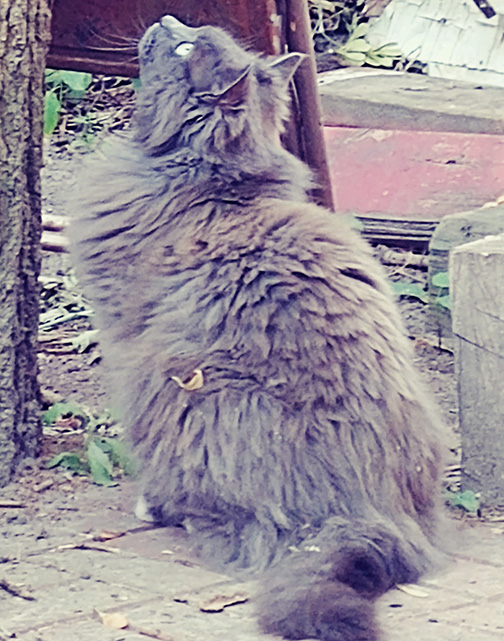 Residents are being asked to be on the lookout for this cat, Blue, who went missing after the tragic fatal house fire at 95 Gainsborough Rd. on Jan. 29. Inset photo shows that the house, surrounded by orange fence, was torn down earlier this month due to severe damage.

Local residents are being asked to help find a cat that went missing after the tragic house fire on Gainsborough Road last month that took the lives of four people.

Kirsten Scollie, a friend of the Jansons family, is organizing the search for the long-haired, blue/grey female cat named Blue.

Jana Jansons, her seven-year-old grandson Kai, Amanda Freimanis, 33, and Matthew Zdybal, 31, died in the fire that broke out in the house at 95 Gainsborough Rd. at approximately 4:30 a.m. on Friday, Jan. 29. Injured in the fire were Jade Jacobis and Arija Jansons, the daughter of Jana and the mother of Kai.

Two cats were also killed in the fire but Blue was outside at the time, said Scollie.

Blue belonged to Kai, said Scollie, and it would mean a lot to Arija if the cat could be found safe.

“Blue was Kai’s cat. They grew up together and were the same age. Blue was outside the night of the fire. She survived but is still missing,” said Scollie.

The house at 95 Gainsborough was severely damaged in the fire and has since been torn down. Scollie said that may be leading to confusion for the lost cat Blue as she no longer has a place to return to.

She is hoping that the East Toronto community, and especially residents and businesses in the Gainsborough  and Eastwood roads area, can come together to help find this lost and scared cat.

Scollie said it would “help ease the pain of this terrible tragedy by re-uniting a scared Blue with her owner Arija. If we can come together as a community to help Blue and Arija it will help heal us all.”

Along with an appeal for residents and business owner to search yards, sheds and under decks, Scollie also said that someone may have unknowingly taken Blue in assuming she did not have an owner.

“We know she is out there. We have to find her,” said Scollie.

“Animal experts say that, in order to find a cat in these circumstances, we have to find where she is sheltering. It may be under a porch or a deck or in a shed. She won’t come to us, we have to go to her.”

Community members have been leaving food out for Blue, donated by Furballs and the Greenwood Park Animal Clinic but there have not been any recent sightings of the cat, said Scollie

A Facebook page has been started to help in the search for Blue and it can be found at TEAM BLUE: Help Find Blue! https://www.facebook.com/groups/letsfindblue

Scollie has also been distributing flyers with photos and information about Blue, and collecting donations from local businesses to go towards a reward.

She is also organizing a Find Blue Day for the community, but a final date has yet to be set for it.

The cause of the fire is still under investigation by the Ontario Fire Marshal’s Office.

There have been two GoFundMe pages set up to help victims of the fire including those in neighbouring homes at 93 and 91 Gainsborough Rd.

The GoFundMe campaigns can be accessed at https://ca.gofundme.com/f/fundraising-for-arija-after-the-fire?qid=5cf4cf26f98bfa105b2c1cd610a37736 and at https://www.gofundme.com/f/help-the-victims-of-last-nights-tragedy-fire/update/27022240/gallery/0?fbclid=IwAR1CTKLDwdLlkiPY4MApBso0HjnShpR7RwUWRexz38uxXdfFlxl-CImbQsE