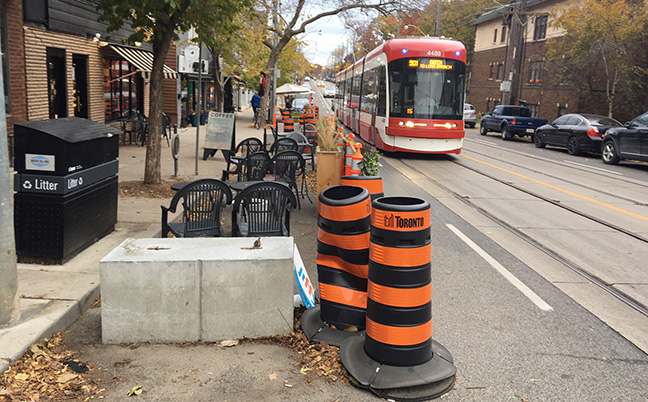 This curb lane patio on Queen Street East in the Beach was among many set up across Toronto as part of last year's CafeTO program. Photo by Alan Shackleton.

The City of Toronto is bringing back its popular CafeTO program with improvements and an earlier launch date.

CafeTO was the city’s pandemic response to provide help to restaurants, bars, and cafes across the city suffering from revenue losses brought on by COVID-19 and the subsequent lockdowns and public health orders.

It proved immensely popular with businesses across the city, including many restaurants in East Toronto.

“The CafeTO program was a lifeline for small businesses this summer,” said Beaches-East York Councillor Brad Bradford. “Nearly 70 per cent say they wouldn’t have survived without it.”

In summer 2020 when outdoor dining was permitted, CafeTO allowed restaurant and bar owners to make patio space in curb lanes, and along city sidewalks. The expanded space for patios allowed for patrons to physically distance – as per Toronto Public Health guidelines – while dining.

For late spring and summer 2021, CafeTO will again be available for restaurants, bars, and cafes across the city. The patios will open in May – two months earlier than they did in 2020.

Traffic management plans will be improved to maintain safety on curb lane patios for diners, employees, and road users.

In some cases, owners are permitted to build decks and platforms for curb lane patios.

At the council meeting in early February, Bradford’s motion asked city staff to look for opportunities to allow retail businesses to use CafeTO space when not used by restaurants, bars, and cafes.

Bradford’s office said it received a lot of feedback from retail stores in the community seeking more opportunities to use outside space.

The city conducted a survey of 2,800 respondents consisting of restaurant and bar owners, and members of the public. The results showed that 95 per cent of respondents want to see CafeTO in 2021, 90 per cent said they were “very satisfied” or “satisfied” with their patio experience.

Perhaps more critically, 66 per cent of operators said their restaurant wouldn’t have survived without CafeTO.

“I’m on weekly calls with all 84 of Toronto’s BIAs and they’ve been instrumental in the design and delivery of this program and so many other supports for our businesses and communities,” Bradford said.