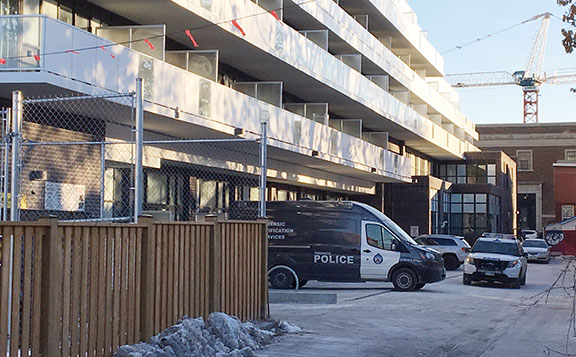 Toronto police are investigating a fatal shooting that took place on the night of Feb. 9 in the parking area of a Danforth Avenue condo. The building is on the south side of Danforth Avenue between Patricia Drive and Morton Road. Photo by Alan Shackleton.

Toronto police are investigating a fatal shooting that took place just off Danforth Avenue on the night of Tuesday, Feb. 9.

Police were called to the parking area of a recently opened condominium building on the south side of Danforth Avenue, between Patricia Drive and Morton Road at approximately 10:35 p.m. last night.

When officers arrived, they found an unconscious man suffering from gunshot wounds in the building’s parking garage.

The man, who is believed to be in his 40s, was pronounced dead at the scene.

Shell casings were found in the area by police.

The man’s death is now under investigation by officers with the homicide squad.

Police are asking for anyone in the area with security camera footage to please contact them. The homicide squad can be reached at 416-808-7400.

The victim of the shooting has not been identified by police at this time. There has not been any suspect information released.

Anyone with information on this shooting can also contact police anonymously through Crime Stoppers at 416-222-8477, or online at https://www.222tips.com/