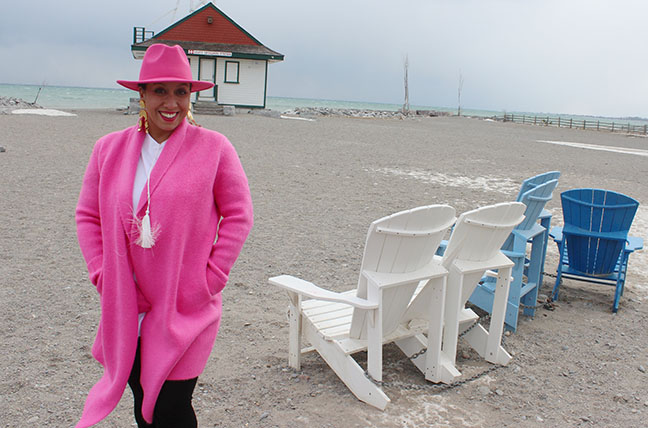 Sapphira Charles in front of the Leuty Lifeguard Station in the Beach last week. Charles is the founder of #BeachersForBlackLives Facebook group. Photo by Alan Shackleton.

The year 2020 will be remembered for the global upheaval caused by an infectious virus – but this last year has also brought a sobering and tragic reminder that racism is alive and well in our communities, and it’s just as infectious.

To celebrate Black History Month, Beach Metro News reached out to a Beach resident who has spent the last year fighting the much older virus of racism within the community, and it’s given her a renewed sense of hope, purpose, and optimism for the Beach.

Sapphira Charles is an architect, an artist, performer, and an activist. She’s lived in the Beach for a number of years now, and is active in the community. It was the racist incidents – both globally and locally – this past year that prompted her into action.

She has organized and led several anti-racism protests and marches in response to racist incidents in the community to raise awareness and offer support.

“Last year was a catalyst,” Charles said. “It started spiralling, the movement became reactivated, but it also empowered a lot of racism.”

It began with the viral video of the murder of African American man George Floyd, where a Minneapolis police officer knelt on Floyd’s neck for eight minutes and 46 seconds, causing his death.
That incident led to widespread protests against police brutality and racism across the United States, Canada, the United Kingdom, and Western Europe.

Soon after, more and more racist incidents kept leaving Charles in a state of confusion, anger, and trauma.

In Manhattan’s Central Park, a Black man named Christian Cooper had the police called on him for bird-watching, the incident was recorded on video and became viral.
While those two known incidents took place in the United States – here in East Toronto there was no shortage of racism.

As activism against racism grew, it also emboldened racists.

In the last year in East Toronto, nooses were found at a Michael Garron Hospital construction site on more than one occasion where Black employees worked. In December, a 34-year-old man was arrested and charged for the incident.

In July 2020, a man in Dentonia Park and his wife were allegedly assaulted, he was called a racial slur, and Toronto police arrived at the scene 30 minutes later, allegedly doubting his and his wife’s retelling of the incident.

In August 2020, an 11-year-old Black boy playing with a toy Nerf gun in Ivan Forrest Gardens park in the Beach had the police called on him.

In September 2020, posters and banners against racism and hate that had been put up in Dentonia Park after a community rally were torn down.

And just recently, this month, a Black History Month art installation outside of the 55 Division police station was vandalized.

These incidents and their effects may prove as innocuous news for many of the community’s white residents, who may have read about it along with the daily flurry of news stories. But for Charles and other black Beachers it’s an existential crisis.

Despite the community not having a large Black population, Charles said she had to do something.

She had attended an anti-racism protest in downtown Toronto shortly after George Floyd’s murder. It inspired her to take over plans for a Black Lives Matter protest in Beach.

Hundreds came out in support, including Beaches-East York Councillor Brad Bradford, and Beaches-East York MPP Rima Berns-McGown. It was a march from Williamson Road Public School to Kew Gardens. Once marchers arrived at Kew Gardens, a handful of Black residents shared their own personal stories with racism.

“It was really powerful, and we felt really vulnerable,” Charles said.

She received overwhelming support from the community, from residents of all backgrounds.

“People were asking me ‘when’s the next protest?” Charles said. “The first one just happened within a day and hundreds of people showed up, the community wanted more.”

Motivated by the support, Charles started the #BeachesForBlackLives Facebook group, which serves as a safe space for organizing, discussion, and reflection.

“People feel supportive of the BIPOC community here,” Charles said of the Beach. “There’s a lot of progressiveness here, and willingness to take action and make change.”

“But it wasn’t without pushback. Some people told me ‘there’s no racism in the Beaches, what are you doing?’” she added.

Following the incidents mentioned above, Charles went out again to protest with local support. Whether a march, a protest, an art installation or a dance rally, Charles has been committed to bringing awareness to not just racism, but also misogyny, homophobia, and other forms of social injustice.

“I have a lot of faith in this community that it’s going in that trend,” she said. “In our group we have a lot of people sharing anti-racist resources, people have said thank you for creating the group.”

Charles has started a newsletter for group members, offering anecdotal reflections, hopeful messages, and a sobering reminder of the realities that still exist for BIPOC Canadians.

“There needs to be action,” she said. “That involves changing your thinking, supporting Black people, and it starts with education and awareness.”

For Black History Month, Charles affirms a month to celebrate Black history isn’t enough, but it’s an important time to “shatter stereotypes” and “showcase what Black people do, what they’re about,” she said.

“We learned more than ever before the power of togetherness and community. We each have a role to play and that is to ensure that where we live and share space is safe, kind, loving, and just for everyone,” Charles wrote in the latest newsletter of #BeachersForBlackLives.