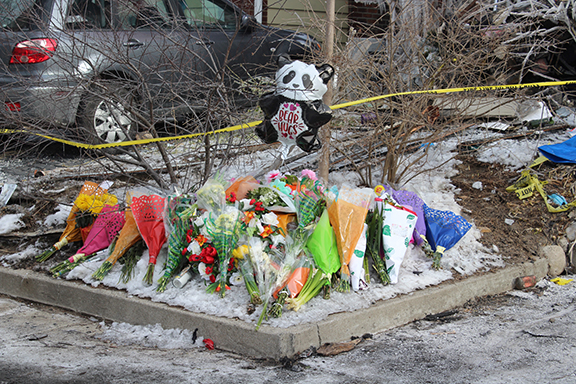 Flowers and a balloon placed at a memorial in front of 95 Gainsborough Rd. Four people died in a fire at the house early on the morning of Jan. 29.

The four people who died in the house fire on the morning of Jan. 29 on Gainsborough Road are being remembered as a number of local fundraisers are ongoing to help the victims and their families.

Killed in the fire which broke out at approximately 4:30 a.m. at 95 Gainsborough Rd., between Eastwood Road and Gerrard Street East, were Jana Jansons, her six-year-old grandson Kai, Amanda Freimanis and Matthew Zdybal, 31. Seriously injured in the fire was Arija, Jana’s daughter. A sixth person, a man named Jade, was also injured but he is now recovering with family.

According to a GoFundMe campaign organized by Arija’s friend Tyler MacDougall, she has severe lung damage as a result of the fire and was just taken off a ventilator on Jan. 31.

Kai was a Grade 1 student at Bowmore Road Junior Public School. He lived in the house on Gainsborough Road with his mother Arija and grandmother Jana. Jansons was a longtime resident of East Toronto, living in the house on Gainsborough Road her entire life. She attended Monarch Park Collegiate and had worked at the University of Toronto.

Freimanis is remembered as a successful and talented DJ.

“Amanda Panda was a very special woman to all of us,” said her friend Kimberley in a GoFundMe page post. “Everyone who knew her was touched by her amazing spirit and energy right away. She embodied kindness, self expression and love. She truly was our unicorn…Panda was a selfless woman. She loved her friends and family with every ounce of her being. Panda loved to dance and share the energy of the dancefloor with her tribe. When she started to DJ everyone knew she was going to rock it, and she absolutely did.”

A Facebook tribute to Zdybal remembered him as a man with a “heart of gold” that was obvious to everyone who met him.

“It was hard to find a time where he didn’t have a smile on his face and he will be remembered for his infectious personality. He was a great family member and friend and will be sorely missed by everyone,” said the tribute. There are three GoFundMe pages supporting the victims of the fire and their families.

The fundraiser for the Gainsborough fire is collecting donations to help out the families of those lost in the fire, and to also support other Gainsborough Road residents impacted by the fire.

Specifically help will be given to “all 15 people impacted/displaced across the three homes” that were damaged in the fire. Along with 95 Gainsborough, the neighbouring house at 93 also suffered severe damage with its roof burned through.

The organizers of the “Fundraiser for the tragic Gainsborough fire” are Marianna Mitrovic, Katherine L. Harrison, and Dennis Kiriopoulos. They are members of the Gainsborough community and friends of the Jansons family and of Jade.

“We are in contact with members of the community and will be also meeting with family members to decide how funds will be dispersed as things unfold,” said the organizers.

According to a GoFundMe campaign being organized by Arija’s cousin Sandra Memenis, donations are being collected to help Arija deal with the terrible tragedy of losing her son, mother and close friends in the fire.

“In a fire you lose everything – after losing a child, material possessions seem so small and insignificant but she’s going to need to start from scratch and if we can help her lift a fragment of that insurmountable burden, please do what you can,” said Memenis. The cause of the fire is still under investigation by the Ontario Fire Marshal’s Office. The severe damage to the house, which is now boarded up, is making that investigation a complex one.

Investigators were still on the scene on the morning of Monday, Feb. 1.

Flowers and a balloon tribute have been placed in front of the house.