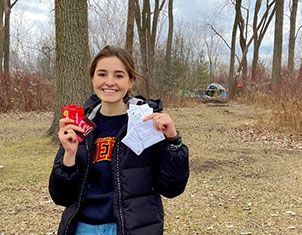 During the difficult times we are in right now, people are finding ways to help each other. That’s something Sydney Farrell, a Grade 12 student at Malvern Collegiate Institute, has been learning in her equity and social sustice class.

“The goal of the course is to create a more positive aspect in our world,” said Farrell. “This particular project was to create an action plan for our community.”

But instead of just creating a plan as part of a school assignment, she went a step further and actually started project to help homeless people access food and transit.

“Why would I do all that work and not put in the effort to complete the mission?” said Farrell.

Farrell said there are as many as 10,000 homeless people on the streets and parks across Toronto, and about 20 soup kitchens in the city. Even though the soup kitchens are spread out throughout the city, Farrell decided to make it easier for those in need to get to them. Her campaign is collecting funding to provide transit fare and Tim Hortons’ gift cards to homeless people

“Today (Wednesday, Jan. 20) was the first day I distributed packages to three people on Lake Shore and one person on Queen Street,” said Farrell. “It’s been up for two days. My original goal was $100. When I hit that, I moved it to $200 and just last night, I moved it to $250.”

So far, she is distributing the packages herself, but she has reached out to The Good Shepherd and Engage in Change. That will help with the distribution of the TTC farse and gift cards, but Farrell will still be in charge of the GoFundMe campaign.

As of Jan. 24, she has raised $815 for the campaign. She plans to continue raising funds for Help The Homeless Access Soup Kitchens for as long as she can.

“I really want to give back to the community. I love having the satisfaction knowing that night, there is one less person on the street who might be hungry,” she said.

“I think this project is super important because I don’t want them to worry about finding the money to get themselves to the food they need for basic survival. It takes their mind off of one less thing they shouldn’t have to worry about.”

Farrell hopes her campaign will have lots of impact on those in need in the community and also spread awareness about the transit challenges faced by the homeless as they try to access food.

Farrell will be attending university out of Toronto next fall, so she is hoping at some point before then to pass the campaign on to a charity that will continue it.

“I really want to get involved with Engage in Change because they physically go out to people living on the streets and provide them with survival kits. I would like to add my packages to their survival kits,” she said.

Donations to the Help The Homeless Access Soup Kitchens GoFundMe campaign can be made at https://www.gofundme.com/f/297hyxcs80?memberId=8115882&utm_campaign=m_pd+share-sheet&utm_medium=copy_link_all&utm_source=customer

The campaign can also be followed on Instagram at @food_forthe_future