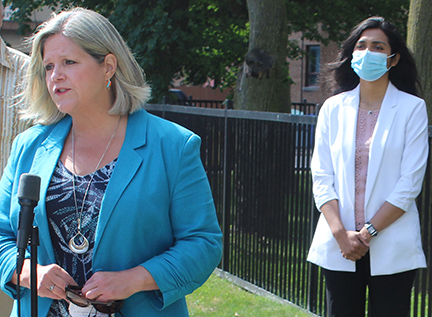 At a virtual press conference on Tuesday, Jan. 19, the two were joined by Yasmin, a frontline worker in Scarborough, who shared her story.

She’s a speech language pathologist working in a hospital in the Greater Toronto Area (GTA). Yasmin chose not to disclose her surname for security purposes. While she’s a part-time worker, she does not qualify for sick leave.

“I work in close proximity to patients with COVID-19,” she said. “I’ve had to take time off to get tested because of mild symptoms, I made the decision to get tested and miss work.”

Yasmin explained that while the fear of contracting the virus weighs on her, there’s an “added fear” of missing work in the event of illness.

“This is the reality for many others, being a frontline health care worker without paid sick days is an added additional burden,” she said.

“Workers are indeed being forced to make an untenable choice,” she said. “Do I make sure I’m protecting my income to maintain my home and family or do I choose to protect people by not going into work sick?”

She further explained that a missed paycheque could cost a worker their rent. Indeed, in Scarborough, there are many who work in frontline or essential work, or multiple precarious part-time jobs, Begum added.

Scarborough Health Network recently admitted its 300th COVID-19 patient in its ICU among its three hospitals. Its positivity rate among people being tested for the virus is between 20 and 27 per cent. Additional challenges such as crowded public transit, and lack of workplace protocol adherence makes the Premier’s “stay-at-home” order a difficult one to follow.

Workers in Canada can currently apply for the federal government’s paid sick leave program which offers $500 per week, up to a maximum of two weeks.

In a press conference earlier this week, Ford said there was “no reason” for the province to introduce its own paid sick leave program “when less than 27 per cent of the overall program hasn’t been taken up.”

Mayor John Tory was also asked by reporters at a briefing on Jan. 18 about the matter and responded “it doesn’t really matter which government resolves” the paid sick leave issue. Horwath called out the Premier for his “weak excuse” and also noted the game of “hot potato” among leaders.

“It’s balderdash! Because it’s less than 27 per cent he doesn’t have to do anything?” she said. “This is the kind of ping pong game that’s going on here, it’s easy because it helps those political leaders duck and cover, and not take responsibility.”

Begum held a town hall on Monday, Jan. 18, with residents and local doctors, including many from the Scarborough Health Network. She noted that doctors are pointing out workplace issues and issues in long-term care as contributing to an overflow of ICU patients.

Begum believes existing marginalization of racialized and low-income communities in Scarborough has exacerbated the pandemic. She believes the provincial government has a responsibility to invest more in these communities and uses transit as an example.

“The way we’ve seen transit done in Scarborough for the last few decades, it’s just been plain wrong,” she said. “People are now on crowded buses, unable to physically distance.”

Horwath and Begum said while the federal program is available, it’s not what workers and doctors are asking for. Many workers wait to find out if they qualify long after their illness, and the break in income is significant for people living paycheque to paycheque, Horwath said.

London West NDP MPP Peggy Sattler introduced the Stay Home if You Are Sick Act in September 2020. It guaranteed paid sick days for all workers, and received praise from the Ontario Federation of Labour and the Ontario Chamber of Commerce.

Horwath is calling on Premier Ford to reconvene the legislature to pass the act.