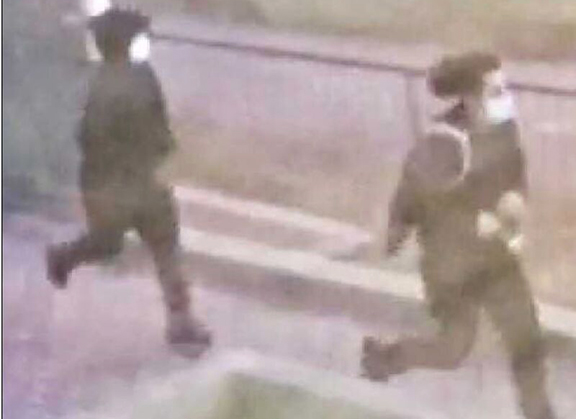 Police have released the above image from a security camera of two suspects sought in connection with a shooting near Victoria Park Avenue and Crescent Town Road on Dec. 23, 2020. Inset photo shows another security camera image of one of the suspects.

Toronto police are asking for the public’s help in identifying two men sought in a shooting investigation.

In a press release issued on Jan. 13, police said officers responded to a call for a shooting in the Victoria Park Avenue and Crescent Town Road area on Wednesday, Dec. 23, 2020, at 5:04 p.m.

According to police, two men had attended a courtyard in the area and had a brief conversation with the victim. One of the suspects pepper sprayed the victim while the other took a handgun from a bag and fired a single shot at the victim, police alleged. The victim was struck in the left leg.

Both suspects and the shooting victim then fled the area, police said.

The first suspect is described as 18 to 19 years old, wearing a black sweater, black pants, black shoes and a face mask.

The second suspect is described as 18 to 19 years old, with long black hair in a ponytail, wearing a black sweater, black pants, black shoes, a face mask and carrying a satchel

Security camera footage can be viewed at https://www.youtube.com/watch?v=zibaqrF-EIs&feature=youtu.be