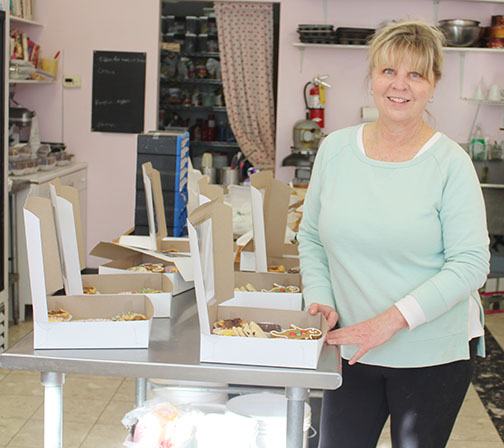 Lynda Paul, owner of It's The Icing on the Cake bakery on Queen Street East in Leslieville, is shown in this Beach Metro News photo from December of 2020. Photo by Alan Shackleton.

The Alcohol and Gaming Commission of Ontario (AGCO) will not be taking any action against a Leslieville bakery that was the focus of an investigation after a complaint by a member of the public regarding the sale of baked goods made with alcohol.

In a letter sent to Lynda Paul, owner of It’s The Icing on the Cake bakery on Queen Street East, sent late on the afternoon of Friday, Jan. 8, the AGCO said “it will not be taking any further action” in relation to the complaint.

In an interview with Beach Metro News on Saturday, Jan. 9, Paul said she is happy to put the matter behind her.

“It was so stupid to begin with, and couldn’t have come at a worse time…during a pandemic and just before Christmas,” she said.

Paul has been running the bakery for the past 16 years in Leslieville, and had never previously been visited by any government agency regarding alcohol content in baked goods.

Beach Metro News first reported on the AGCO investigation on Dec. 18. At that time, Paul said she was visited by a compliance officer who said the complaint had been made regarding the alcohol content of baked goods she was selling such as Kahlua brownies, Cointreau fruit cake, and bourbon-peach cheesecake.

“He said they had received a complaint by a person that I was selling alcohol illegally,” Paul told Beach Metro News in an interview on Dec. 18.

Since the complaint had been made, the AGCO had to look into it.

In the Dec. 18 story, Paul said the complaint was likely made as a vindictive act towards her and the bakery.

To see Beach Metro News’ earlier story on this, please go to https://beachmetro.com/2020/12/18/leslieville-bakery-under-investigation-by-province-after-complaint-regarding-alcohol-in-items-such-as-fruitcake-and-brownies/

Those vindictive intentions aimed at hurting her business ended up doing the opposite, said Paul on Jan. 9.

“It backfired on them. I’ve never had so much attention. I was doing radio interviews, and received lots of support from other bakeries and the community.”

Paul said she did not need the stress of the complaint hanging over her and her business these past few weeks and is glad it is over now.

“I would be doing cartwheels right now if I could.”

The AGCO is the provincial agency responsible for regulating the safe and responsible sale and service of beverage alcohol, under the authority of the Liquor Licence Act (LLA).