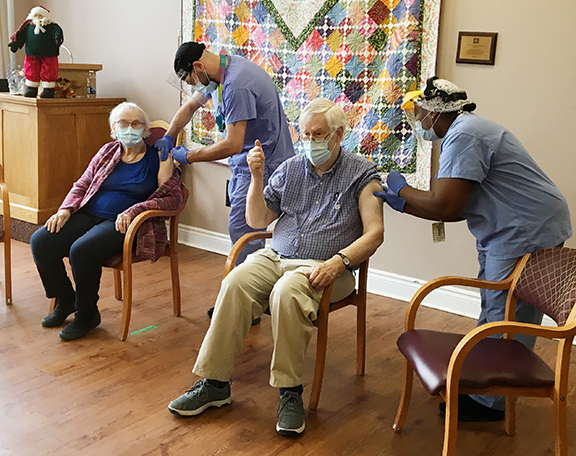 Michael Garron Hospital’s infection control team was at the St. Clair O’Connor Community Long Term Care Home in East York on Wednesday, Jan. 6, to deliver COVID-19 vaccination shots to all of the residents at the facility who were eligible to receive it.

On hand to congratulate the first residents to receive the shot were a number of dignitaries including retired Gen. Rick Hillier, the head of Ontario’s Vaccination Distribution Task Force.

First to receive their shots of the Moderna vaccine just before noon today were resident John Coburn, 84, and his wife and caregiver Beverley, 90.

The both happily rolled up their sleeves and said they had no hesitation at all about receiving the vaccine. They were personally congratulated by Hillier who spoke with them after they were given their shots.

“I think everybody should get it,” said Beverley. “You are a hazard to the health of others if you don’t have it. It’s ridiculous not to have it.”

Beverley taught public health at both the University of Toronto and George Brown College, and she knows how important vaccination programs are in keeping people safe.

“I had not one bit of hesitation about this vaccine. I worked in public health and these vaccines are wonderful things,” she said.

John and Beverley have resided at the St. Clair O’Connor Community LTC for the past five and a half years. In the spring, they were among residents in the building who went through a lockdown and quarantine as the facility dealt with an outbreak of COVID-19 that took the lives of eight residents.

John said those were scary times, but he is feeling much better about the future now.

“There were some problems in long term care homes at the start of this, but they have been eradicated now,” he said. “We haven’t had to be quarantined for a long time now.”

John said he has always had a strong immune system and feels “even better” now that he has had the vaccine.

“It’s very important that everyone get it,” said of the vaccine. “If even one person is out and doesn’t have it, it’s a problem.”

Hillier, tasked by Premier Doug Ford with rolling out vaccine shots across Ontario, said on Wednesday that despite a slow start the program is now on pace to deliver them to residents and staff at all long-term care homes in the provinces four hot spots (Toronto, Peel, York, and Windsor-Essex) by Jan. 21. He also had praise for the work being done by the vaccination team at Michael Garron Hospital, which will have reached all 22 of the long-term care homes within its assigned area in East Toronto.

“The difference comes down to leadership and proactive leadership, and they’ve got it done,” said Hillier.

He said all of the hospitals and public health units responsible for administering vaccinations can learn lessons from each other.

“We’re all learning lessons about best practices like those at Michael Garron Hospital,” said Hillier. “The local involvement is a very powerful thing.”

MGH’s strategy has basically been one of bringing the Moderna vaccine directly to residents in long-term care homes, while arranging times for staffers to come to the hospital for Pfizer shots. This has to do with the ability to transport the Pfizer vaccine, which requires extreme cold storage, along with not wanting to have LTC residents come to the hospital for a shot.

“It’s a daunting task,” said Hillier of getting the vaccine rolled out in first the hot spot communities to those most vulnerable, and the across the rest of the province.

Sarah Downey, President and CEO of Michael Garron Hospital, said it has taken a lot of thinking and preparation to make the vaccine roll out work in East Toronto.

“We started planning this weeks ago,” she said. “We had it figured out and were ready to go” once the vaccines were delivered to the hospital.

The very first COVID-19 vaccination shot given by the MGH team was a Pfizer dose on Dec. 22 at the hospital to Brigitte Pascual, a Registered Practical Nurse (RPN) who has been caring for residents at Midland Gardens. She and other staff had been brought to the hospital for their shots on a special TTC bus.

By the end of Jan. 6, MGH said it will have delivered 2,500 vaccine shots to LTC residents in East Toronto, and another 1,530 to staffers and essential caregivers.

Downey said the hospital has been able to leverage the relationships it has built with East Toronto LTC facilities as it helped them control COVID-19 infections and deal with outbreaks over the last 11 months to get the vaccine shots into the arms of residents and staff.

“We’ve been able to educate the staffs and get the logistics working” when it comes to giving hundreds of residents a shot in one day, she said. “You have to work out the logistics, have a game plan and then just go.”

Councillor Bradford, who was also at St. Clair O’Connor Community LTC on Wednesday, also praised the work done by MGH to get the vaccine out. “They were ready to go when the time came,” he said.

The next challenge for not just East Toronto, but the entire city and province, will be rolling out the vaccine to the larger, general population once all of those who are considered vulnerable have been given their shots. Though that time is still in the future, the preparation work needs to begin now, said Bradford.