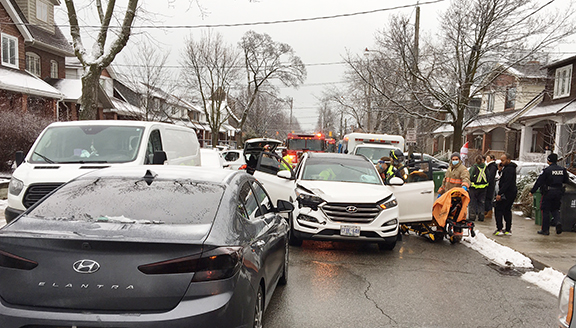 Firefighters help out a woman in a vehicle that was involved in a collision on Scarborough Road on the morning of Tuesday, Jan. 5. Photo by Alan Shackleton.

A woman suffered what appeared to be minor injuries after a collision involving two vehicles on Scarborough Road earlier this morning.

Emergency crews were called to Scarborough Road, north of Kingston Road and south of Woodale Avenue, at approximately 9:30 a.m. for the collision.

Early reports indicate that a vehicle backing out of a driveway and another vehicle heading northbound on Scarborough Road collided.

Air bags in both vehicles inflated. What appeared to be the northbound vehicle had damage to its front end and passenger side. The other vehicle appeared to have damage on its driver’s side and was wedged beside a parked car on the east side of the road.

A woman in the northbound vehicle was helped out by firefighters and taken on a stretcher to a waiting ambulance for treatment. Her injuries did not appear to be serious.

Police are investigating the incident.

Scarborough Road north of Kingston and south of Woodale is closed while the investigation and cleanup of debris takes place.