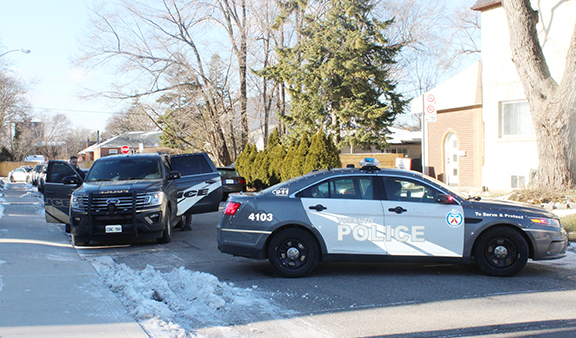 Police investigate on Donside Drive after a man broke into a house on the street. When police arrived, they were not sure if the man was still inside so the house was surrounded by officers. it was later determined the man had fled the house and was not inside. Photo by Alan Shackleton.

There was a heavy police presence in the Pharmacy Avenue and Donside Drive area of southwest Scarborough earlier today as officers investigated a reported break-in at a house.

Police were called to the Donside Drive and Maybourne Avenue area at approximately 10;26 a.m. on Tuesday, Dec. 29, for reports that a man had broken into a house.

It was not known if the man was still in the house when officers arrived, and the home was surrounded by police. Along with officers from 41 Division, the Emergency Task Force was also on the scene.

It was eventually determined that the man had fled the area and no one was in the house.

Police had established a large cordon around the area, including blocking northbound lanes of  Victoria Park Avenue between Crescent Town Road and Donside Drive.