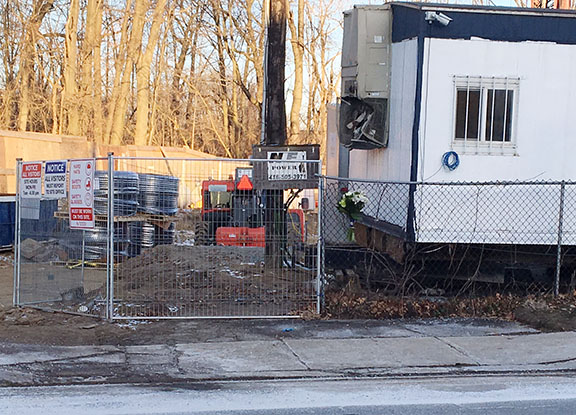 Flowers are seen on the construction fence on Clonmore Drive Friday morning. A 31-year-old man who was working directing traffic at the site was struck and killed by a vehicle on Clonmore Drive on the afternoon of Thursday, Dec. 17. Photo by Alan Shackleton.

Toronto police Traffic Services Unit is investigating a fatal collision that took the life of a 31-year-old pedestrian on the afternoon of Thursday, Dec. 17.

Emergency crews were called to Clonmore Drive at Queensbury Avenue at 3:52 p.m. for reports that a man had been struck by a vehicle.

According to police, a 31-year-old man was working directing traffic at a construction site on the north side of Clonmore Drive when he was struck by a vehicle heading westbound.

The 31-year-old man was rushed to hospital where he succumbed to his injuries, police said.

Police said the 23-year-old male driver of the red 1999 Toyota sedan that struck the man remained at the scene.

Local residents, businesses, and drivers, who may have security or dash camera footage of the area or incident, are asked to contact Traffic Services investigators at 416-808-1900. Police can also be contacted anonymously through Crime Stoppers at 416-222-8477 or online at https:www.222tips.com

The construction site is being cleared in advance of a townhouse project to be built there. As of Friday morning, there was a bouquet of flowers attached to the construction fence and work did not appear to be taking place.