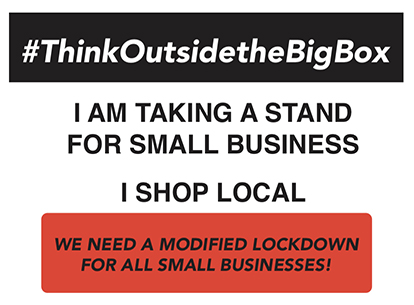 The GreekTown on The Danforth BIA is among a number of Toronto BIAs supporting the #ThinkOutsideTheBigBox campaign.

GreekTown on the Danforth lost 15 businesses this year due to COVID-19 and is now running a campaign to encourage the East Toronto community to shop local, be it at their businesses or businesses in other local BIAs.

In an interview with the Beach Metro News, GreekTown BIA Executive Director Mary Fragedakis expressed grief over the impact COVID-19 has had on local businesses.

While the first lockdown in the spring had slammed businesses, the current second lockdown just before Christmas is crippling, she said. Fragedakis added that small businesses and restaurants in GreekTown and other local BIAs were not the main source of outbreaks.

“The problem is not the restaurants, the salons, the spas,” she said. “The problem is people are going to places like Walmart in the hundreds, and then a house party, or you’re on transit shoved into a bus like sardines going to work because you have no choice.”

She said while GreekTown suffers, “everybody’s Main Street” is suffering.

In part of a campaign to encourage local shopping, the BIA released a video made by Toronto-based production company Impossible Studios in which Santa Claus is seen setting fire to a pile of Amazon boxes. To view the video, go to https://notimpossible.ca/videos/bad-santa-shop-small/

“You need a bit of dark humour, it’s a dark time,” Fragedakis said. “The emphasis is to shop local, to support local businesses with curbside pickup, delivery, takeout, and anything else.

The final week before Christmas is the “biggest shopping week of the season,” and the current lockdown forces losses for businesses who rely on this critical shopping period.

GreekTown has lost 15 businesses this year, including Papa’s Grill, Relish Bar and Grill, Brass Taps, Athena Bakery, and even a Pizzaiolo.

And like many BIAs across Toronto, GreekTown has repeatedly expressed frustration that despite following all the guidelines and protocols, investing in PPE, and allowing limited customers, they are forced to close during the lockdown while big box retailers such as Walmart and Costco remain open.

“You follow the rules, and they shut you down,” Fragedakis said.

She largely blames the provincial government for mishandling the pandemic response. “You’re favouring big business, when the cases aren’t coming from small businesses,” she said. “We’re being punished and there’s no rationale.”

GreekTown on the Danforth is also part of local East Toronto BIAs participating in the #ThinkOutsideTheBigBox campaign to support local businesses.