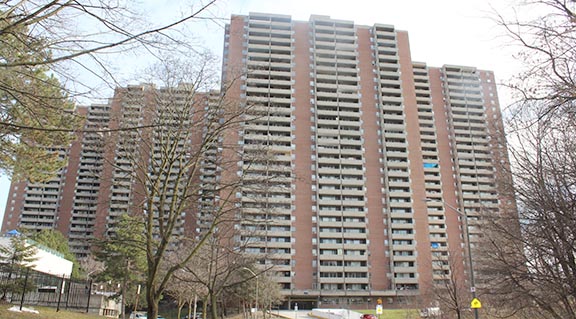 Many tenants in the buildings of Crescent Town, and nearby Goodwood Court, are facing an eviction crisis says Beaches-East York MPP Rima Berns-McGown (shown in inset photo).

If residential tenants are a day late, or a dollar short on their rent, they can be evicted without a hearing.

That’s been the case since March as a combination of the COVID-19 pandemic and Bill 184 has caused an “eviction crisis,” Beaches-East York MP Rima Berns-McGown said.

It’s also led to the emergence of tenants unions across the city, including in East Toronto’s Crescent Town and Goodwood Park area.

Sima Atri, a lawyer and co-founder of law firm the Community Justice Collective, has spent much of the year providing free legal services for organized tenants groups, including the Crescent Town Tenants’ Union and the Goodwood Tenants’ Union.

“A lot of people in these neighbourhoods lost their jobs as soon as the pandemic began,” she said.

Atri added that tenants who lost work were unable to pay rent. As soon as April, the landlords of Crescent Town and Goodwood apartments Pinedale Properties and Ranee Management Ltd. began sending tenants eviction notices. By May, many tenants had eviction applications filed against them.

“The recent string of evictions are from those initially filed applications in the beginning,” Atri added.

Which means evictions filed in the late summer and fall, will occur in the coming winter months.

The particular neighbourhood has been hard hit with a high rate of COVID-19 cases and residential evictions. They’re not the only tenants unions in the city either; dozens of them have emerged to fight for tenants’ rights as COVID-19 exacerbates already precarious work and living conditions for many tenants. Many tenants in the area are essential workers and cannot afford to miss work.

As per Bill 184, landlords can renegotiate payment terms with a tenant if the tenant cannot pay rent in full or on time. Those renegotiated plans are what Peoples’ Defence volunteer Sam Nithiananthan calls “eviction orders waiting to happen” as they’re often signed out of coercion, pressure, or desperation, he said.

“Tenants have been on the frontlines for months,” Nithiananthan said.

Nithiananthan is one of many organizers and volunteers for Peoples’ Defence – an organization fighting on behalf of tenants. Volunteers have helped tenants in a variety of methods including helping them through their Landlord and Tenant Board proceedings to blocking sheriffs from evicting tenants who are at-risk and may experience homelessness following the eviction.

“Many organizers, tenant advocacy groups, we’ve been ringing this bell for nine months now that we’re about to walk into an eviction crisis,” Nithiananthan said. “We’re here now.”

He says it’s a problem that goes beyond East Toronto, to communities in Scarborough and Etobicoke, across the GTA, and out in rural Ontario.

He largely places the blame on “corporate landlords” that have a “significant amount of wealth and power.”

While he and Berns-McGown have concerns with how the Landlord and Tenant Board functioned before the crisis, they say Bill 184 is largely responsible for the situation today.

When the bill was introduced earlier this year, it was presented as a solution to what was a housing crisis before the pandemic began. As the pandemic swept through the country and left thousands across the city without work or pay, the crisis worsened.

A moratorium on residential evictions followed in the first lockdown in March, that moratorium was lifted Aug. 1, causing a flood of backlogged evictions at the reopened LTB, resulting in a fast-tracking of eviction hearings.

“The province shouldn’t be allowing COVID-related evictions at all,” Berns-McGown said. “It’s a failure of response, and it’s cruel.”

Berns-McGown, and her municipal and federal counterparts Beaches-East York Councillor Brad Bradford and Beaches-East York MP Nathaniel Erskine-Smith, have not only been in constant touch with tenants, but have also repeatedly called for the provincial government to reintroduce a residential moratorium in the second lockdown.

“Fast forward many months, we’re still in the pandemic, they still haven’t gotten their jobs back,” Atri said. “Most have filed tenant union-initiated repayment plans and pay some of the arrears, but landlords haven’t dropped the eviction hearings against them.”

In September, the Landlord and Tenant Board reopened, forcing evictions again. There were massive backlogs of eviction hearings forcing a LTB hearings running in several rooms at once, with 12 cases in every hour, which Berns-McGown said caused people to get evicted in minutes.

“If the landlord isn’t there, the hearing does not proceed,” she said. “If the tenant is not there, then they proceed without the tenant.”

The landlord is required to prove to the LTB that the tenant has received a notice of eviction. Berns-McGown and Atri have both argued that many tenants do not properly receive their notice.

“There’s no mechanism to ensure the tenant actually received the notice, that’s one problem,” Berns-McGown said.

When the LTB hearings started up again, 50 tenants unions leaders from East York joined to form a collective known as the East York 50 to support each other at eviction hearings.

“The landlord has an obligation to meaningfully negotiate before filing or going to an eviction hearing, as per Bill 184,” Atri said. “Tenants unions have reached out as a collective, but landlords have refused to negotiate or offer repayment plans.”

Atri and Berns-McGown have learned that landlords do not desire to deal with tenants collectively, and prefer negotiating one-on-one.

Despite that, it seems Pinedale and Ranee don’t like it at all, Nithiananthan said. “They don’t like any tenant organization.”

He alleged signage and posters for a holiday hampers event to provide food donations to tenants in Crescent Town was taken down by Ranee Management. Earlier in the year, posters celebrating Eid were also torn down, he alleged.

While politicians in support urge for a residential moratorium, Atri and Nithiananthan argue that “we need a real solution” to rent relief and the affordability crisis.

“Politicians have left us to flounder,” Nithiananthan said. “Some blame jurisdiction, some blame a lack of political will, but 47 per cent of the city are renters.”

“That’s why you’re seeing tenants unions, we’re going to defend each other,” he added.

Pinedale Properties and Ranee Management did not respond to a request for comment on this story.