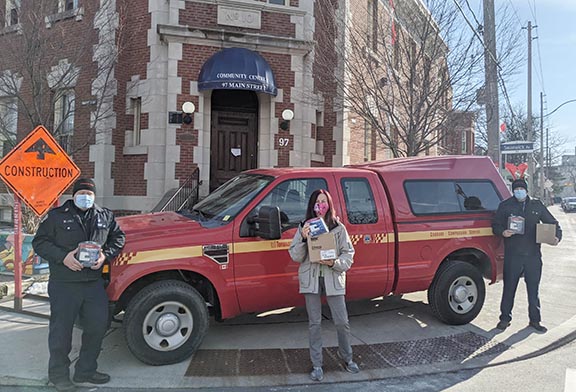 Community Centre 55’s Share a Christmas campaign is in its final push for donations as it works to help more than 1,000 local families who are in need this holiday season.

The COVID-19 pandemic has delivered this year’s campaign a double-whammy as it increased the number of people seeking help while also severely limiting the number of volunteers Community Centre 55 can utilize and completely ending donations of non-perishable food items.

Debbie Visconti, Executive Director of Community Centre 55, said the cost of replacing what was traditionally a flood of donated food items is a challenge for this year’s Share a Christmas.

“My biggest ask is for financial donations,” she said. “We have had to replace thousands of pounds of food donations with cash purchases.”

Instead of packing Christmas hampers full of food and other items to last recipients for a number of days over the holidays, Community Centre 55 is now giving out grocery store gift cards for those in need to use.

That’s because COVID-19 has put a stop to the traditional gatherings of large groups of volunteers over the past 39 years at the centre who spend evenings packing up the hampers with donations.

“Our volunteers want to help but they just can’t,” said Visconti of the packing and delivering of hampers.

Since many families are scaling back their holiday celebrations due to the pandemic, Visconti said some of those savings are finding their way to the Share a Christmas campaign.

“So instead of spending it on themselves, they are helping others in the community,” she said of these donations.

Numerous individuals and organizations are also stepping up to help, said Visconti.
Toronto Fire Services dropped off toy donations as did the Toronto Transit Commission’s (TTC) Stuff the Bus. Also, Toronto Fire with the help of First Alert Canada donated 300 carbon monoxide alarms which will be distributed by Community Centre 55 to families in need.

Local businesses such as DeClute Real Estate are also helping collect toys and raise funds for this year’s Share a Christmas. DeClute is running a Holiday Toy Drive Porch Pick Up campaign and more info can be found at https://holidaypickup.com/

As well, Beaches Lacrosse helped raise more than $10,000 as they matched donations up to $5,000 as part of an initiative to use excess funds from The Jammer tournament which did not take place this year due to COVID-19.

Visconti appreciates all of the support coming from the community.

“Everyone is helping us by doing whatever they can…It’s a lot of little efforts that are making the difference.”

She added that despite the challenges, both financially and logistically this year, there was never a thought to cancelling Share a Christmas for 2020 as so many people depend on it.

“We just couldn’t let it go even though there is a pandemic.”

The best way members of the community can help is by making a donation, and that can be done directly to Community Centre 55, at 97 Main St., or online by going to www.centre55.com.