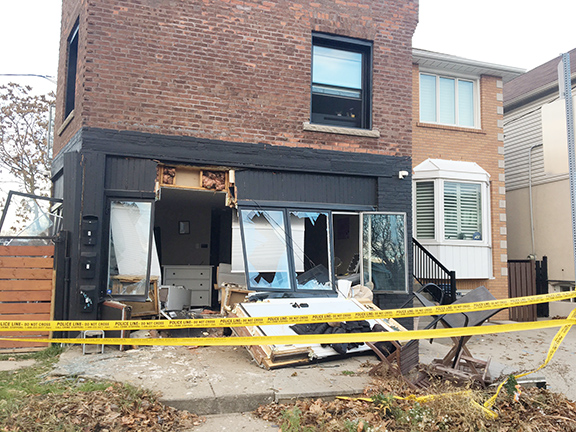 Toronto police have announced the arrest of a 30-year-old woman in connection with an explosion and fire at a residence on Woodbine Avenue on Nov. 27. Photo by Alan Shackleton.

Toronto police have announced the arrest of a 30-year-old woman in connection with an explosion and fire at a residence in East York on Nov. 27.

Police said in a press release on Tuesday, Dec. 8, that Cassandra Nicholson had surrendered to police earlier that day.

On Nov. 28, police arrested and charged Johnathan Nicholson, 38, in connection with the incident. He faces a total of nine charges including arson causing bodily harm, criminal negligence causing bodily harm, arson – disregard for human life, and altering cannabis with an organic solvent.

Police alleged that the explosion was caused by criminal activity by two tenants of the building who were using chemicals to make illicit drugs.

There were a number of people in the house when the explosion and fire happened. Two children suffered major burns in the incident, police said on Dec. 4. and they are both still in hospital being treated for their injuries.

Last Friday, police released a photo of Cassandra Nicholson and of a vehicle she was believed to be driving. ( https://beachmetro.com/2020/12/04/police-seek-woman-30-on-drug-and-arson-charges-in-woodbine-avenue-house-explosion-that-left-two-children-with-serious-burn-injuries/ )