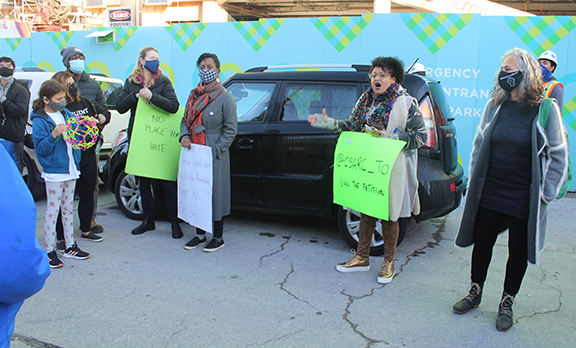 Members of the East York community protested against incidents of racism at the Michael Garron Hospital construction site earlier this year.

A 34-year-old man has been charged in connection with a hate-motivated mischief and criminal harassment investigation by Toronto police related to an incident earlier this year on the construction site of the Michael Garron Hospital expansion.

Police were called to the construction site at the northeast corner of Coxwell and Sammon avenues on Wednesday, June 10, at 12:31 p.m. When officers arrived, they were told that workers assigned to the closed construction site, which is not accessible to members of the public, had found two nooses on their construction equipment.

“As part of the Toronto Police Service’s commitment to tackling Hate Crimes, a task force was set up in response to several similar reports at construction sites across the city. This project team includes members of the Hate Crime Unit as well as investigators from 55 Division, 52 Division and 11 Division. As a result of the investigation, officers were able to identify a suspect in relation to one of the nooses discovered on June 10, 2020. A 34-year-old man was arrested on Friday, December 4, 2020.”

Jason Lahay, 34, of Toronto, has been charged with Mischief Interrupt Property Over $5000.00 and three counts of Criminal Harassment.

“When suspected hate-motivated offences are reported to police, the investigation will be led by a divisional investigator. The Hate Crime Unit will be made aware and specialized officers from that unit will support the investigation as needed. If it is alleged a criminal offence was committed (such as assault or mischief) and it is believed to have been motivated by bias, prejudice or hate, the officer-in-charge will consult with the Crown. If a person is charged and convicted of the offence, the Judge will take into consideration hate as an aggravating factor when imposing a sentence.

The June 10 incident at the hospital expansion site was not the only one in which anti-Black racism has been discovered at construction sites in Toronto this year. Nooses were also found at sites at Dundas and Sumach streets on June 26, and at 81 Bay St. on June 25.