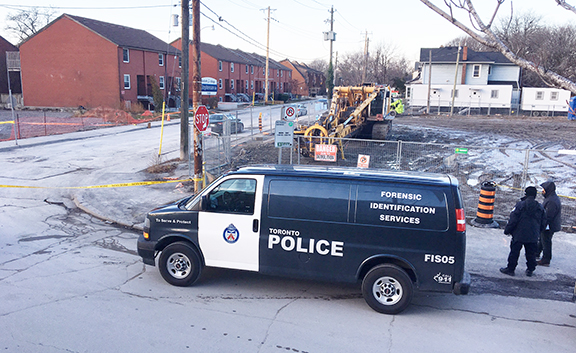 Toronto police were on Stephenson Avenue this morning (Saturday, Nov. 28) investigating a shooting that took place at approximately 4 a.m. and seriously injured a 25-year-old man. Photo by Alan Shackleton.

Toronto police are investigating after a man was seriously injured in a shooting near Main Street and Danforth avenue early on the morning of Saturday, Nov. 28.

The incident took place at approximately 4 a.m. on Stephenson Avenue.

The victim was rushed to hospital with life-threatening injuries.

No one else was injured.

The suspect is described a man in his 20s wearing a balaclava over his face. He was also wearing a black winter jacket and a black hoodie.

There is no further information available on the shooting at this time.