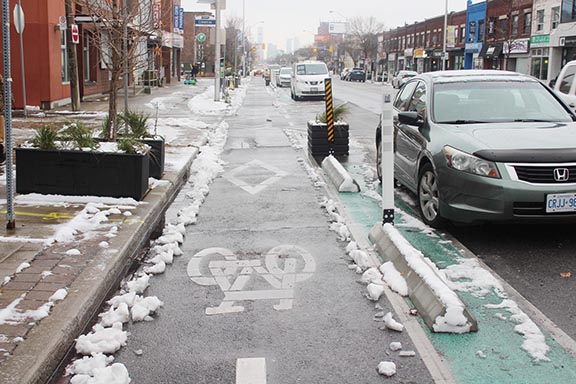 Along with passing a motion for improved snow clearing on sidewalks in a number of local neighbourhoods, Toronto City Council also backed snow clearing for the bike lanes along Danforth Avenue. Photo by Alan Shackleton.

It came in response to several letters and emails from residents’ groups, cycling groups, and other concerned community members who said the current snow removal standards are insufficient.

ActiveTO’s street pilot Destination Danforth – which saw the rapid installation of cycling lanes on Danforth Avenue between Broadview Avenue and Dawes Road – will continue, and its bike lanes will be cleared accordingly.

The motion to increase sidewalk snow clearing in parts of the pre-amalgamation City of Toronto, and Borough of East York is in response to a Safe and Accessible Snow Clearing Motion by Toronto-St. Paul’s Councillor Josh Matlow.

At its Nov. 26 meeting, Toronto City Council directed “General Manager, Transportation Services to report to the December 2, 2020 meeting of the Toronto and East York Community Council with the streets that will receive sidewalk snow clearing during the 2020-2021 winter season, the rationale for not providing full sidewalk clearing harmonization, if applicable, and a path forward to full harmonization for the 2021-2022 winter season for City Council’s consideration.”

The city will also find options for clearing snow in pedestrian and cycling pathways in parks this winter as a way to make them more accessible as residents look for ways to enjoy the outdoors as the COVID-19 pandemic continues.

“With the COVID-19 pandemic forcing us all to be outdoors, the City of Toronto must prepare this winter season for an increase in the use of our cycling infrastructure and pedestrian traffic on our city’s streets, sidewalks, and park amenities,” the motion read.