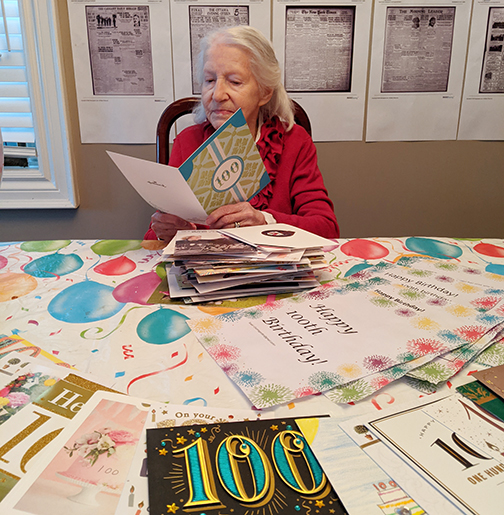 Monica Christensen is surrounded by birthday wishes on her 100th birthday which was celebrated on Nov. 26. Photo by Lisa Christensen.

When the daughter of Monica Christensen put out a call to the East Toronto community to send 100th birthday wishes to her mother this month, she was not expecting the overwhelming response the family received.

Beach Metro News first ran the story in our Nov. 17 edition, letting the community know that Lisa Christensen was hoping to have 100 birthday wishes sent to her mom either by email or regular mail.

Originally, her family was planning on a big birthday party with lots of guests to celebrate the milestone but that simply could not happen due to the COVID-19 pandemic.

Instead, Lisa let Beach Metro News know she was looking for birthday wishes to be sent to her mom, and the story grew from there.

Once the news got out, it was picked up by a number of other media organizations and at last count Monica had received more than 2,100 birthday wishes by email and 84 cards and counting by regular mail.

Premier Doug Ford and Mayor John Tory were among those who sent her birthday wishes.

Monica also received a congratulatory scroll marking the occasion that was hand-delivered by the office of Beaches-East York MPP Rima Berns-McGown, said Lisa.

And on her actual birthday of Thursday, Nov. 26, Monica was serenaded by police officers from 55 Division who visited the porch of the family’s Westlake Avenue home with lights flashing and sirens sounding on their vehicles.

Lisa said it has been a great birthday for her mom who is a Second World War veteran, having served as a radio operator with the British Commonwealth Air Training program which was run by the Royal Canadian Air Force in Edmonton, Alberta.

Lisa added that the birthday greetings are continuing to arrive.

“They’re still coming. Her personal emails (before I lost internet access) stood at over 2,100. She received 84 cards, with more, I’m told, in the mail,” said Lisa in a note to Beach Metro News on Nov. 27.

Lisa is thanking everyone who sent Monica birthday wishes. She also said thank to Beach Metro News for our original story letting the community know about it.

“It was Beach Metro News that got the birthday ball rolling. Numerous people referenced that article you wrote in their cards and messages, so I can’t thank you enough. Mom’s 100th birthday ended up not just being celebrated with the four of us, but with our whole community, province and people. Legions, Brownie groups, school classes, corporations, from all over the world. In a word: galactic.”