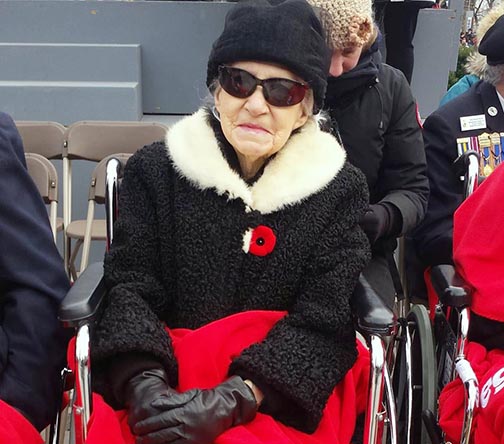 Monica Christensen served as a radio operator with the Royal Canadian Air Force in the Second World War. Her 100th birthday is on Nov. 26. Photo; Submitted.

The East Toronto community is being invited to help Monica Christensen celebrate her 100th birthday.

Christensen is a Second World War veteran who has been living in the area with her daughter Lisa since 2011.

The family had originally planned to hold an open house at their Westlake Avenue home, but due to COVID-19 that won’t be happening.

Instead, Lisa is hoping the community can send her mom birthday wishes to mark the special day.

“Because of COVID-19, I’ve made and cancelled a dozen plans,” said Lisa in a note to Beach Metro News. “We can’t hold an open house, but that gave me the idea to post a For Monica real estate-type sign in our front yard to encourage neighbours to send greetings.”

Lisa is hoping she can gather at least 100 email greetings or actual birthday cards to show to her mother on Nov. 26.

The greetings can be sent by email to a special address set for Christensen at monica19202020@gmail.com. Birthday cards also be mailed to 127 Westlake Ave., Toronto, ON, M4C 4R7.

Before moving in with her daughter, Christensen lived in a number of communities across the country as her husband Peter was with the Royal Canadian Air Force. During his air force career, which included the Second World War and then from 1951 to 1965, he flew planes such as Harvard’s, Tutor jets, the Avro Anson and Hercules transports.

Monica and Peter lived in communities such as Edmonton, Rivers, Manitoba, Winnipeg, Downsview, Hamilton and Belleville before settling in Brooks, Alberta after retiring.

The couple met early in the Second World War while Monica was serving as a radio operator at the Number 2 AOS (Air Observer School) in Edmonton.

They first met “over the air” as Monica would communicate instructions to Peter as he was flying.

The AOS in Edmonton was part of the British Commonwealth Air Training Program, which trained more than 130,000 air and ground crews from Canada, Australia, New Zealand and the United States under the guidance of the Royal Canadian Air Force.

Christensen said some of her memories of that time include the many friends made at AOS and the “outgoing Australians and Americans undergoing training in Edmonton – the city had never experienced anyone quite like them.”

They were married in 1944 in Montreal, and had two children, three grandchildren and four great grandchildren.

Most of the other family members live in Alberta, Lisa said.