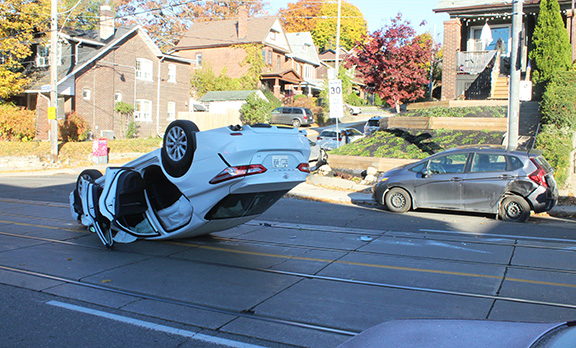 This Toyota Camry ended up on its roof after striking a number of parked cars on Gerrard Street East at Gainsborough Road on the morning of Oct. 31. Photo by Alan Shackleton.

A woman is believed to have suffered minor injuries after a car rolled over on Gerrard Street East near Gainsborough Road this morning.

A westbound white Toyota Camry struck a number of cars parked on the north side of Gerrard Street East and flipped over onto the middle of the road.

Gerrard is closed between Beaton Avenue and Coxwell Avenue while police investigate.

Witnesses said the woman was able to be taken out of the vehicle and multiple air bags deployed inside it, which helped limit what might have otherwise been very serious injuries.

It is not known how long Gerrard east of Coxwell be closed for the investigation and clean up.