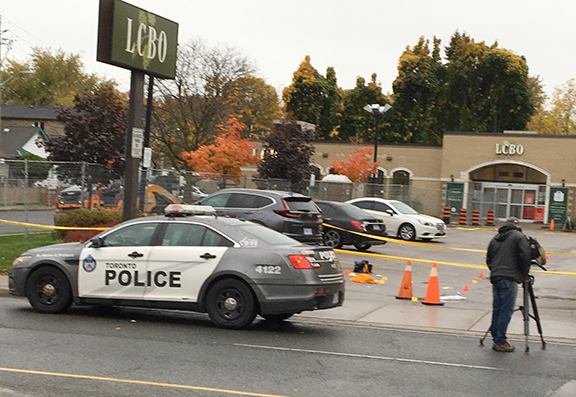 A 22-year-old man died yesterday after being shot in the parking lot of the LCBO store on Danforth Avenue just east of Victoria Park Avenue. Photo by Alan Shackleton.

An apparent dispute over social distancing inside an LCBO store on Danforth Avenue may have led to the shooting death of a 22-year-old man in the parking lot late on the afternoon of Sunday, Oct. 25.

Thanks to help from witnesses at the scene at 3111 Danforth Ave., just east of Victoria Park Avenue, police were able to quickly locate a vehicle that had fled the area heading east and take three male suspects into custody.

At this time, police have not released any information on the ages of those taken into custody or whether any charges are pending.

The parking lot in front of the liquor store was blocked off by police tape and there were evidence cones and other items still visible on the morning of Oct. 26.

According to 680 News, an employee of the LCBO store said the shooting was a result of a dispute over social distancing inside the store that then escalated in the parking lot.